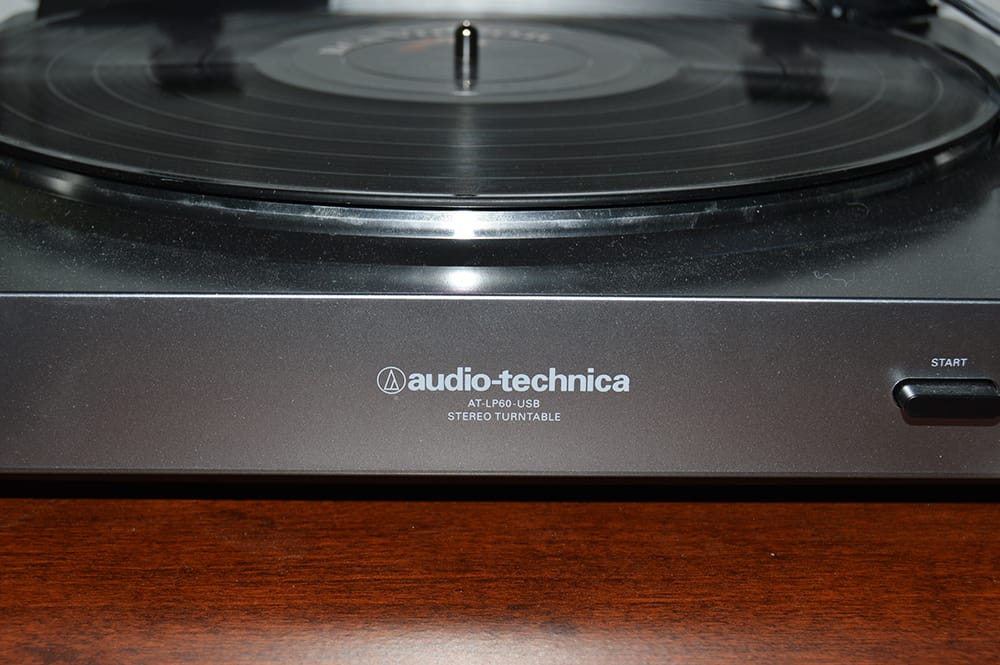 Today I will be doing a very special review of the Audio Technica AT LP60!

It’s a great little entry-level turntable with some awesome features. It won’t break the bank and is ideal for people new to vinyl and looking to get their feet wet. Before we get started, grab a snack sit back and relax because…

You’re in the right place!!

I am a sample-based producer, so I needed an affordable and quality solution to my problem. I had a ton of records lying around, but nothing to play them with!

My dad has had a Technics SL-1700 for over 30 years, and you can be darned sure he doesn’t want my cotton pickin’ hands all over it!

Don’t tell him, but when I was younger I would sneak in some listening in the afternoon while he was away at work. Eventually, I had to succumb to the pressure and buy my own.

reviewing an affordable, reliable USB turntable from the comfort of my apartment. It’s pretty easy to set up if you follow some basic instructions, and comes with RCA cables for easy hookup to various types of equipment that we’ll also discuss!

The easiest way to hook it up, Homie:

The turntable comes with a 3.5mm female to dual RCA male adapter. On the back, you’ve got your standard RCA males. This makes for easy hookup to pretty much any set of active speakers that has RCA inputs, or any generic speaker that has a green 3.5mm stereo jack.

You can also use this turntable with any Headphone Amp/DAC that has RCA inputs as well. For instance, the FiiO K5 Pro makes a great pair with the AT LP60 because it has RCA inputs. I love spinning records and listening to them with a headphone like the AKG K702.

Another example would be something like the Creative SoundBlasterX G6 because it has a line input. For this setup, just use the adapter that comes with the turntable. RCA males > RCA female adapter > Line out female > Line in male > SoundBlasterX G6 (line-in). Here’s an image of what it looks like: 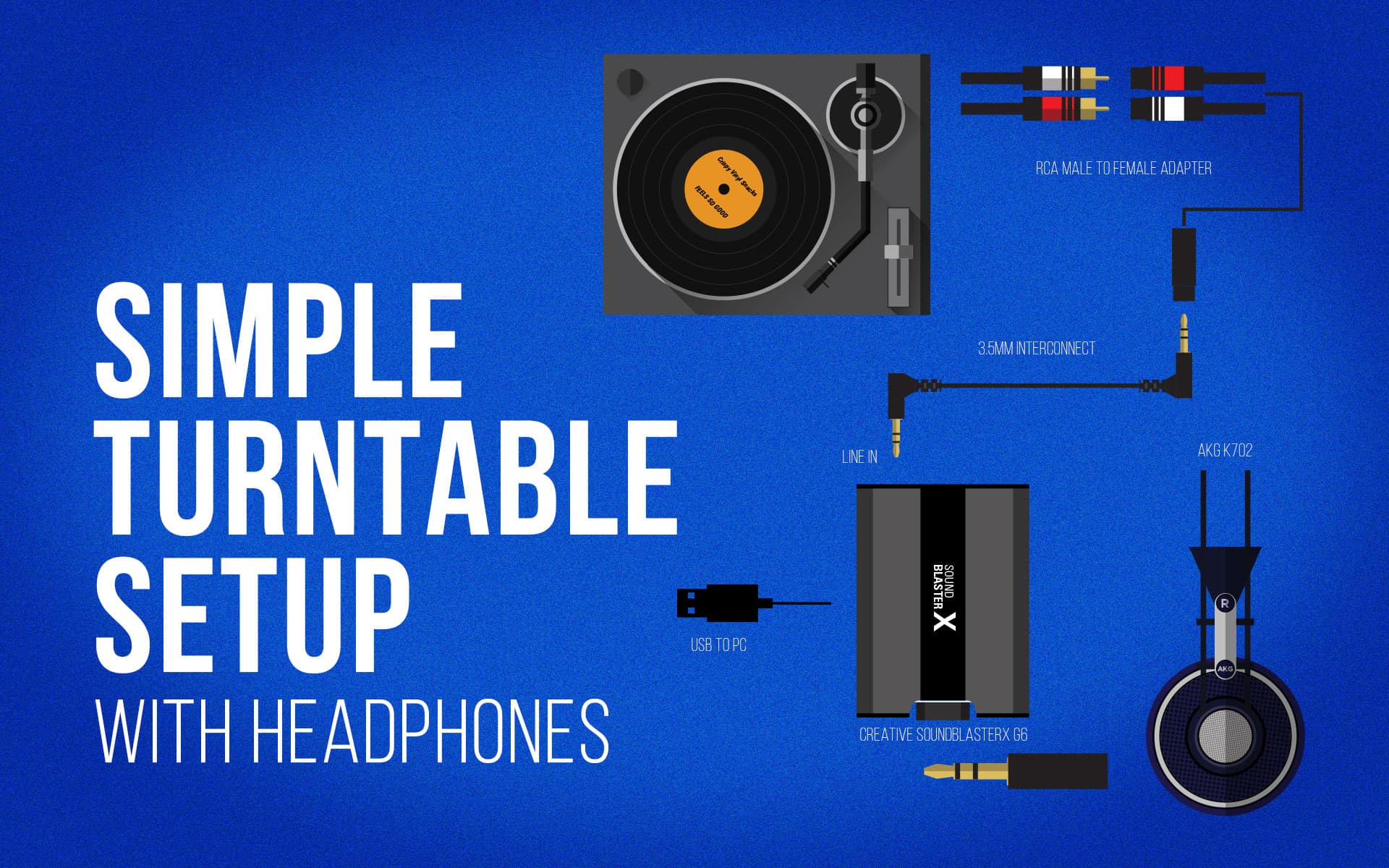 Remember to tick the switch on the back to LINE. 🙂

This is a great setup because the G6, like the K5 Pro, has plenty of power to get those records crankin’!

I also have a set of generic speakers. For those:

Use the 3.5 mm stereo male jack (from your speakers, typically Green) and plug it into the female jack (that comes with the turntable). We touched on it above, but there are a couple of ways you can use this turntable with the K5 Pro:

Receiver with the LP60

Another option is to plug the turntable’s RCA males into the back of a receiver and listen to your records through some home theater speakers. Just make sure the receiver in question has phono inputs, and don’t forget to tick the switch on the back of the turntable to PHONO!! For use with an Amp/DAC in the above examples, the switch will be set to LINE. 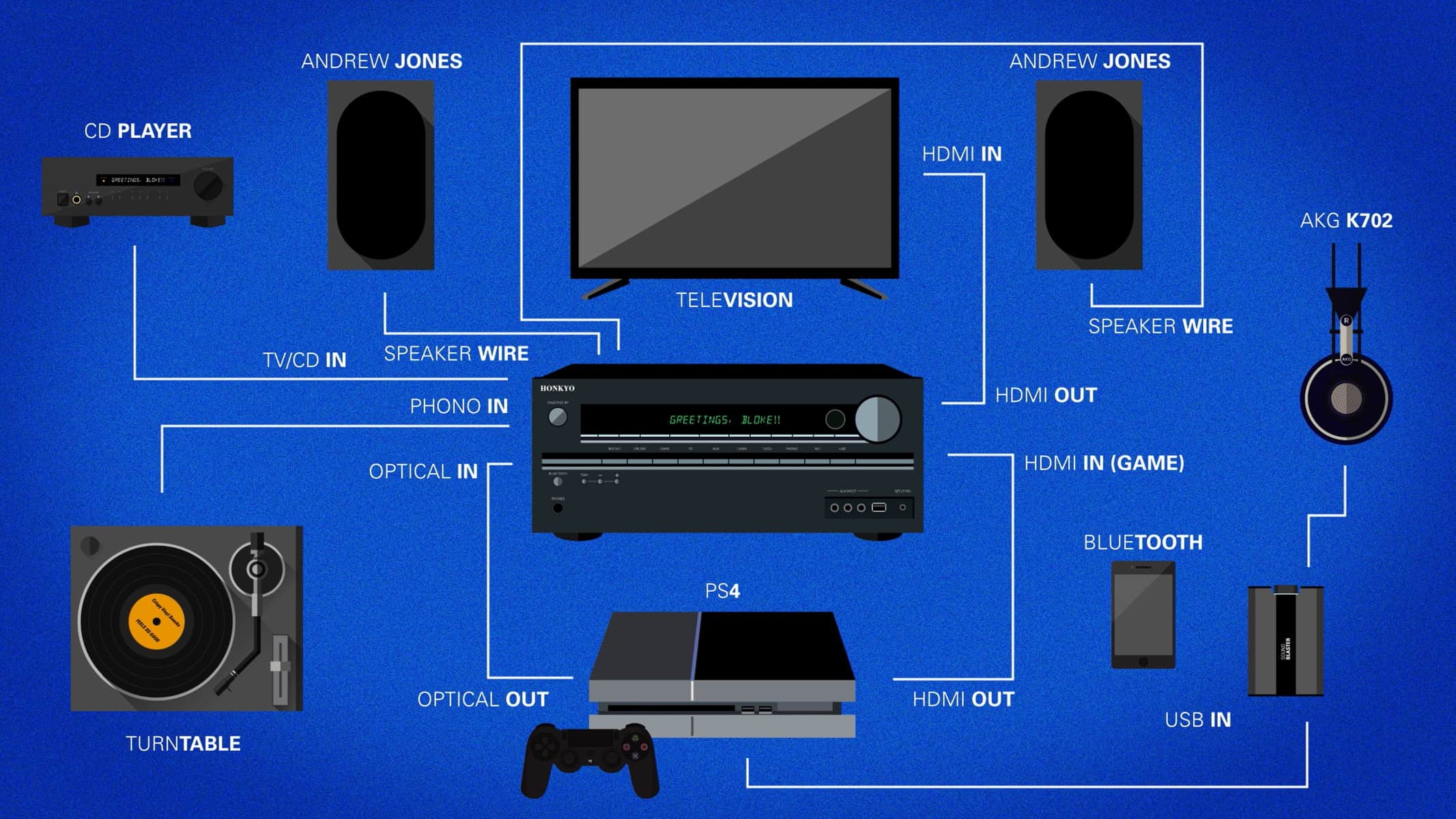 The AT LP60 even comes with Audacity, which is a great little program for ripping your vinyl and making audio CDs. Or sampling 😀

My dad has even recruited me to make him CDs of all his old favorites. Now he wants one too!!

Another great feature is the autoplay. Just press the start button on the front and the needle starts up by itself. You don’t even have to touch it if you don’t want to. I’m kind of old school so I enjoy putting the stylus where I want.

Another feature, which I don’t use often, is speed. You can press a button and increase it to 45, or leave it at 33 RPM. 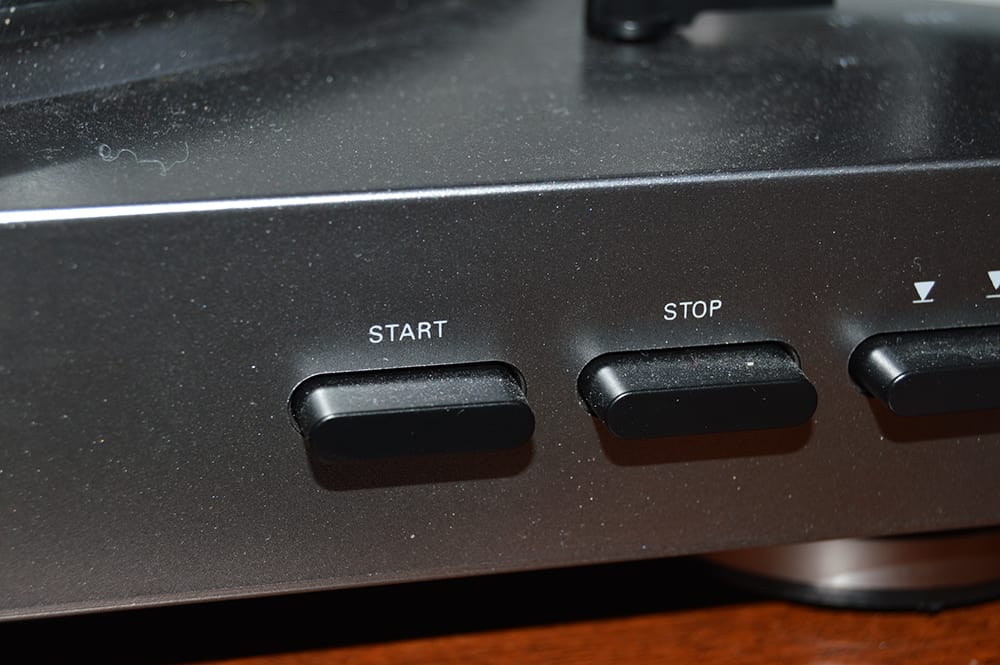 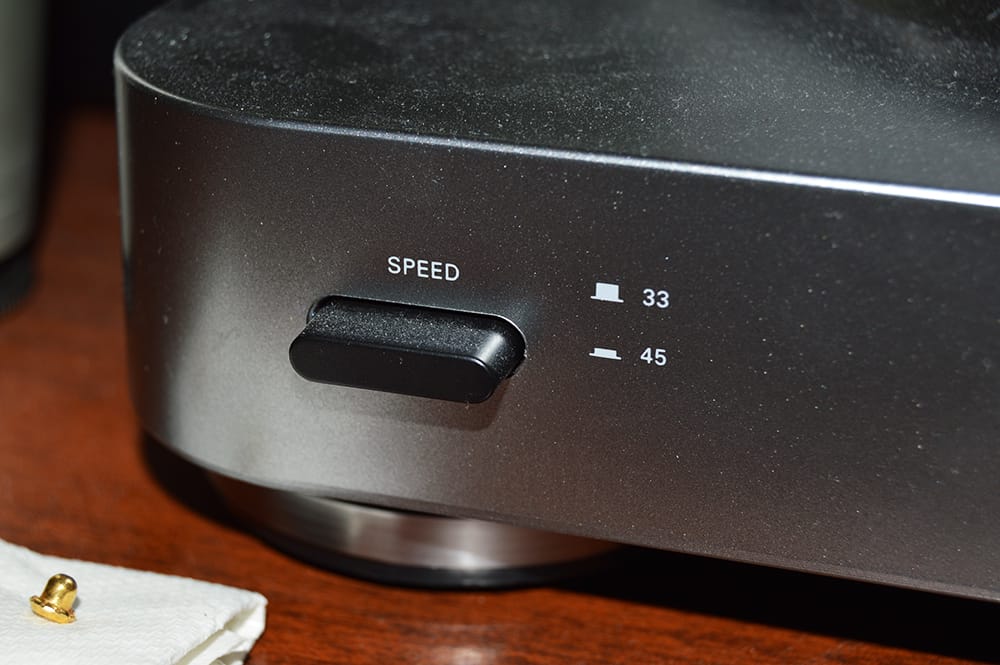 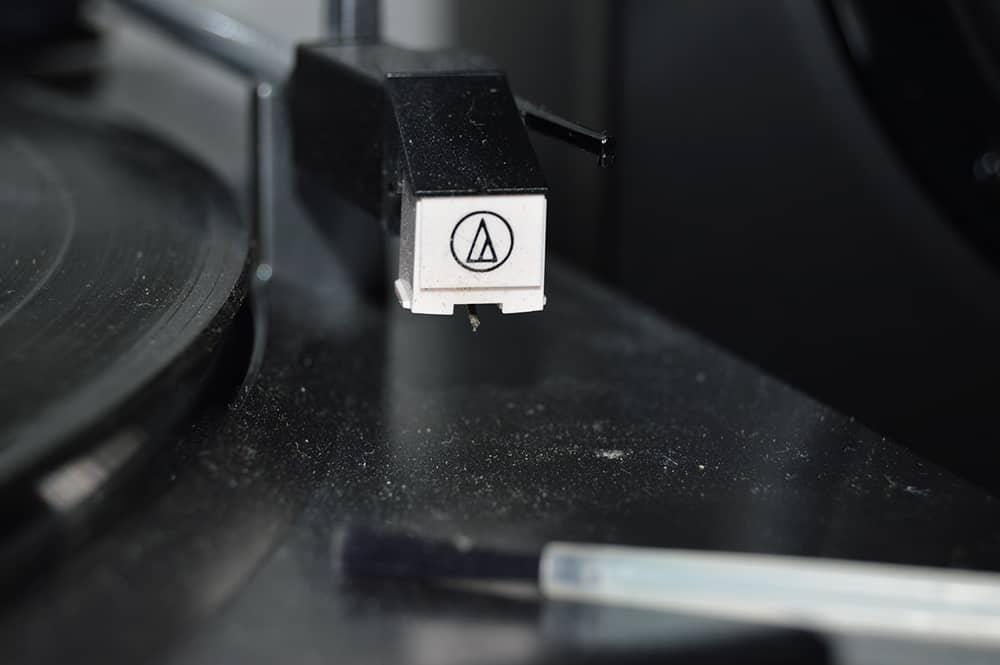 The button all the way to the right lifts the needle and in essence, pauses a track much like a pause button. The record still spins and you can press the button again to resume play.

As simple as it gets…

This turntable is really as simple as it gets. I don’t know much about the logistics of turntables themselves, or what makes one better than another. I’m sure there are a group of snobs somewhere on the internet bashing this thing. But who cares, because everywhere you look it’s got pretty near flawless reviews and I’ve used mine in the studio since 2014!

That’s right you heard me correctly. This thing is still kickin’ and looking back was an insane value at its price given how many hours I’ve spun vinyl with it over the years. It’s quite a workhorse machine.

The dust cover comes in handy as well. If you forget to put it down after use, you will find yourself cleaning the needle. Please make sure to use a stylus cleaner that is meant for the job. Use anything else, and you may end up damaging it.

I should mention some quirks that I’ve experienced with this unit. In owning one piece of gear for so long, you’re bound to run into some oddities, and the LP60 has a couple, and they both involve the start and stop buttons:

Pressing the stop button results in the needle lifting from the record, but not returning to its original place.

My workaround is to simply let it drop back down. When this happens, the needle will move to the end of the record, lift up, and resume its position on the cradle.

For me, this isn’t really a big deal as it still generally works as it’s supposed to (meaning the stylus still moves to its original position after the record finishes), but your mileage may vary.

When you press the start button, the stylus doesn’t drop at the start of the record anymore. It drops towards the end, lifts back up, and then resumes its original position in the cradle.

In other words, it doesn’t actually do its job. 😛

My workaround for this is to simply do it by hand. A minor inconvenience, but ultimately not a big deal for me since the act of physically starting a record is part of the charm! Again, your mileage may vary.

Even despite those quirks, I still think this unit is an easy purchase as it sounds fantastic and still spins records after all this time + it’s really versatile and can work with a plethora of different equipment you may have.

What more is there to say. This is one of the best options you can go with for an entry-level unit.

Here’s the updated one!

Well, that’s about it for today my friend! Hope you enjoyed my Audio Technica at lp 60 review!!

Questions? Comments? Requests? Did I miss the mark on something? Please Contact me!

What do you think about this turntable? Is it a good deal?? I would love to hear from you. Until next time… 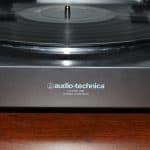 Great to see a honest down to earth review and reminded me of the old 78’s, is there one like it that can play and record them too?

Yes! In fact, the Audio Technica AT LP120 can do just that. You have inspired me to write a review of this product as well. I put a couple links on my sidebar.. I may even pick one up in the future. It looks delicious. Thanks for the comment Sheila!
-Stu

Stu,
If the needle gets damaged, can it be replace easily.
John

Yes it sure can! The ATN-3600 or ATN-3600L are both replacement stylus options for this model! They can be found on zZounds and amazon! Thank you for the question!
-Stu

one of these days I really do want to pick up a turn table. I always hear about how much better the sound is. For the price like you said this would be a perfect start to getting into vinyl records. I am sure it would turn into an addiction for me.

It’s a really fun hobby. You can buy vinyls for as little as a quarter! It is quite addicting. I’m always at the thrift store buying in bulk. I usually buy 40 records at a time!
I appreciate your comment
-Stu

I just bought a pink one for my 8 year old daughter 🙂 She loves it so much, and our old neighbor gifted her an old John McCutcheon ‘Mail Myself to You’ LP. Needless to say your review sealed the deal for me, I was kinda hesitant to get this based on how simple it looked 😉 But I was so pleasantly surprised at this player. It brings a happy smile to my face every time I look at it, and the best part is that I get to enjoy it with my two little girls, who can’t wait to get home from school to put a record on. Blissful heaven <3

Aww, that’s adorable lol. I love the simplicity of it and I’m sure you do as well! I’ve had mine since Dec. 2014 and it hasn’t failed me after very frequent use! What a great find! I’m so glad you’re enjoying yours as well. It’s funny because I feel that exact same way when I look at it, even to this day. Lol. I just smile at it. It’s just a beautiful piece of equipment and goes very well in my studio. You will especially love it for rainy days and coffee! 🙂 That said..

If you ever need a hand with any gear recommendations, don’t hesitate to contact me! . I look forward to hearing from you again.. Drop back by anytime!!
Blessings,
-Stu