Before we get into the HIFIMAN HE400S Review, grab a snack, sit back and relax because..

Man I really love these headphones. I got a chance to demo them at a home theater store. My local Audio Advice lends out headphones for audition, and at first I didn’t have a strong reaction either way. As I continued listening with them it’s like a light bulb went off and I couldn’t believe how phenomenal they sounded even out of my smartphone (I use Android). I was using both Spotify and Deezer as my sources, as well as the Bryston BHA-1 and more recently a NAIM DAC V-1. I believe most of Spotify’s songs are 192 kbps, but if you’re a premium member you get the coveted 320kbps. The more you can listen with high quality source files the better your listening experience will be. That said, the 400S handles just about anything well!

As much as I like them, they do have a bit of an obnoxious character at times, and are definitely in your face and more intense than a 400i. Learn more: HIFIMAN HE400i Review!!

The 400i is more laid back, and has a glossier, smoother overall sound. It’s warmer and more lush, while the 400S is cooler and has a brighter response. I would say that the relationship between the 400S and 400i is similar to that of the Sennheiser HD600 vs. 650. The 600 is more sterile and clinical, while the 650 is warmer. Learn more: HIFIMAN HE400S vs. 400i!

I would recommend the HD600 over the 400S when it’s all said and done. I believe the 600’s to be analytical without sounding harsh or out of line. The treble is going to be somewhat darker, but this will ensure much less fatigue over time. The 400S will wear you out quicker for sure.

An amp isn’t required, but will greatly aid you in the studio when you’re sitting at your desk. I absolutely love these straight out of my phone though. They aren’t too loud or too quiet; it’s a nice happy medium.

Wow, so out of those? My top recommendations would be the Audioquest DragonFly Red for something super portable, and the JDS Labs Objective 2 or ATOM for something desktop worthy. I personally use the Schiit Magni/Modi combo as well as an Oppo HA-2 which I also love.

With the Focus Pads (replacement ear pads), more bass driven music comes to life. The problem with this is that they cost an additional $40 when they should be included for no extra cost, or used as the original ear pads! It really defeats the entire purpose. They also add bass at the expense of the luscious 3D sound signature. I do think the pads here are a weak point, but I would rather get an exact replacement of the originals then sacrifice the great Soundstage for more bass. I just don’t feel like I personally need more, but some people did complain about it. What is Soundstage?

A phenomenal sounding headphone with some potential build issues and a weird wonky cable. Definitely will want to go aftermarket here. Gets a tad uncomfortable overtime, and the ear-pads tend to want to deflate even though they seem to be made of velour.

Even despite their issues, I would still probably buy these and be completely fine with it. They’re not going to be your on the go headphone by any means, nor even your primary one. But good golly they sound amazing. I’m not even exaggerating here.

SEE THE 400S FOR YOURSELF ON AMAZON!!

As for your primary headphone? Gotta go with the HD600. It’s the quintessential studio headphone, and outclasses nearly everything even being over 20 years old. Interested in an in depth and informative discussion?

Well that’s about it for today my friend! I hope you’ve enjoyed this HIFIMAN HE400S Review.

Which of these tickles YOUR pickle? Would you invest in the 400S? I would love to hear from you. Until next time.. 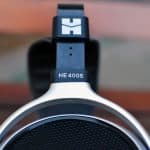