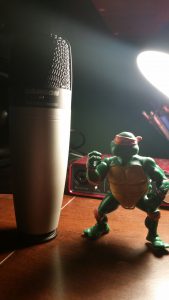 When it comes down to the hardware used to record these sounds, choosing shouldn’t be tricky. Some of the interfaces mentioned before come bundled with microphones, stands and pop filters. I will discuss some different types and how to choose one for your studio. After all, you want to be able to scream obscenities into the mic right?!? 😀 😛 I know I do!

In general, there are two types to choose from:

All microphones generate a weak signal by themselves, and need some type of amplifier to boost the signal to a usable frequency. This is why it’s so important to choose the right Audio Interface (as outlined in the previous section).

The way these work is much simpler than a condenser because they receive sound similar to how our ears do. The sound waves hit a diaphragm inside which vibrates a magnet relative to a coil of wire. This generates an electrical signal which is sent down the output cable. In the same way, sound strikes our eardrums and travels to nerve endings which produce a signal our brain interprets as sound. For more information on this process, check out: What is a cardioid capsule?

They differ from condenser mics in that they don’t need phantom power, and are much more durable. They also don’t pick up much sound outside of the immediate vicinity, i.e. crowd noise, ambient sound etc. These would do extremely well in a live setting, and have the potential to give your studio sessions a live flavor. They really work well in environments without Acoustic Sound Treatment, as they tend to block out most noise by default.

What I went with when starting out, and what you should probably go with is a condenser mic. They have the ability to record vocals and instruments well.

They detect sound differently then dynamic microphones, and as a result are more sensitive. Both receive sound through a diaphragm, but when a condenser vibrates it generates a signal (an electric charge) that is received by an external power source. This could be from a battery or more commonly the phantom power that your audio interface uses. Large diaphragm vs. Small diaphragm.

I bought a Samson C01 as my first ever, and it still holds up to this day. It’s solid as a rock and heavy enough to deter any doubts about build quality. It’s also very affordable and reliable, and has really come down in price over the years. Another option to consider, and something I will probably end up buying in the future is the MXL 770.  Just remember that condenser mics do extremely well in studio settings because of their ability to detect things in the immediate vicinity (i.e. your screaming cake hole :P)

I really won’t go into too much detail here other than you are going to want a mic stand, shock mount, and pop filter for your new toy.

It’s nice to have a boom stand because it is fully adjustable and can tower over other components in your studio if need be. You’ll also want a shock mount, which absorbs any vibrations and prevents them from sneaking their way into your recording. Finally, you should invest in a pop filter (with snake arm attached) as well. This comes in handy when you are really letting that mic have it. It 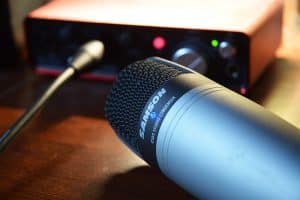 paired with the 2i2!

blocks any and all undesirable blasts of air (dubbed “plosives”) from reaching the diaphragm inside. It also keeps your mic clean and free of nasty spit that may fly out of your mouth as you’re cursing up a storm. SAY IT DON’T SPRAY IT! 😛

Honestly, the inside of a mic is delicate like a flower, and having a pop filter will ensure it lasts a long time.

I used to have the On Stage Stands MS7701B Tripod Boom Microphone Stand stand for years in my studio and it served me pretty well, though it was kind of a pain to be honest. I go into more detail about that in this article: The Best Mics For Gaming.

I ended up selling it for something more portable and convenient: The Pro Line MS112 Desk Boom Mic Stand.

Update: I have since sold the desktop stand and am now in the market for a Scissor arm. I would highyl recommend these due to their versatility and ease of use.

All of my research has pointed me in the direction of the Rode PSA1. Most people say to bypass the cheaper stuff because you’ll just end up having to get the PSA1 down the road anyway (HAHA! That’s sort of like a pun)! The other products tend to break down over time whereas the PSA1 is a solid investment upfront and will last you forever.

Stu, Great website here. I really enjoy your writing style and how down to earth you seem. If I ever want to start up a home studio I know which site to visit first. Keep it up!
Aaron

Hey Aaron, thanks so much for your kind words!.. Very inspiring to me moving forward
-Stu

Hey, I loved your website, easy to read. Currently I am using an EV N/D67a. I tried it out in the music store. So far, it is fine for both voice and flute. Thanks, enjoy reading about any updates you might have.
E.

Thanks so much Eiress! I will have to check out that piece of equipment. i’m assuming it’s a mic? It’s great to hear what others are using!!
Yes please keep checking back, I’m vigorously building it out and it will be growing exponentially in the coming weeks.
-Stu

Stu, I started planning for a home studio only few days back but after reading some of your posts it seems I suddenly know so much. Really like your writing style — clear and concise. Will tell about your blog to lot of my other music loving friends here in India!

Thank you so much Mukesh! If you ever need anything, just Contact me..

Need some help. I have a SM7B going into a Cloudlifter going into a Yamaha MG10XU. When I record into Audacity the recording comes out very quiet. All of the equipment is brand new. On the mixer the gain & levels are turned up. In Audacity the mic level is turned up. Any ideas? Thanks

I’m at a loss there. I assume your line out and line in are set correctly in Audacity?