Today I’m going to be comin’ at you with a super informative post about the difference between a USB microphone and an XLR microphone!

So sit back, relax, and grab a bowl of popcorn, because…

I’ve seen this dilemma come up so many times throughout my research and in reading reviews on the internet. People get really intimidated when they hear certain words that pertain to XLR. These could be any of the following:

and probably a whole slew of other terms that I can’t even think of right now! 🙂

The good news is that setting up an XLR mic isn’t quite as complicated as people make it out to be. What is XLR?

All it requires are a few extra accessories, but in no way are these things difficult to set up. When I was first building my home studio, I was really overwhelmed because I thought it had to look like one of those places you see in magazines and on TV.

You know, the huge room with like a zillion knobs? What does it all mean Basil?

Luckily, setting up a home studio and utilizing an XLR setup isn’t difficult at all.

This stands for “Digital Audio Workstation.” A lot of people tend to spread misinformation about this term. It does NOT mean your sequencer, or what program you use to lay down tracks and vocals. Your sequencer IS a component of your DAW, but a DAW is comprised of 3 parts.

Audio Interface (The external sound card) What is a soundcard? 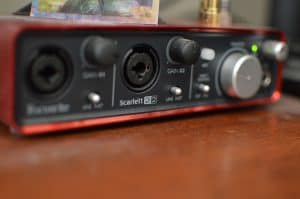 This is the meat and potatoes of the setup. As we know now, your computer contains its own internal sound card, but often times it’s the overlooked feature of the computer. It doesn’t record very well, emanates sub-par sound, and doesn’t suffice at all in a quality home studio setup.

This is where the audio interface comes in. A good one will be really easy to use and have some cool features, while also being affordable.

The interface will come bundled with a USB cable. Simply plug one end into a USB port on your computer, and plug the other end into the back of your interface.

Your computer should in theory instantly recognize it and begin installing the drivers that the unit came with. Just make sure that your operating system is compatible with the interface before you go purchasing it. 🙂

This is perhaps the reason why you are reading this. A mic set up with XLR is very simple, but requires one thing:

One end of this bad boy simply plugs into your mic. The other runs into the front of your interface.

What people get confused by

I’ve read countless reviews on amazon from people who bought an XLR condenser mic, and then actually gave the product a bad review because they didn’t pay attention to what they were buying. The bad review went something like this:

“Bad product. The mic didn’t come with a cable. It doesn’t work. I could not plug it into my computer. Stay away!”

What that reviewer and many others didn’t realize is that they needed an audio interface but didn’t research the matter beforehand. He saw some good reviews for the mic and went for it. A key component of his setup was missing. What was it really though? 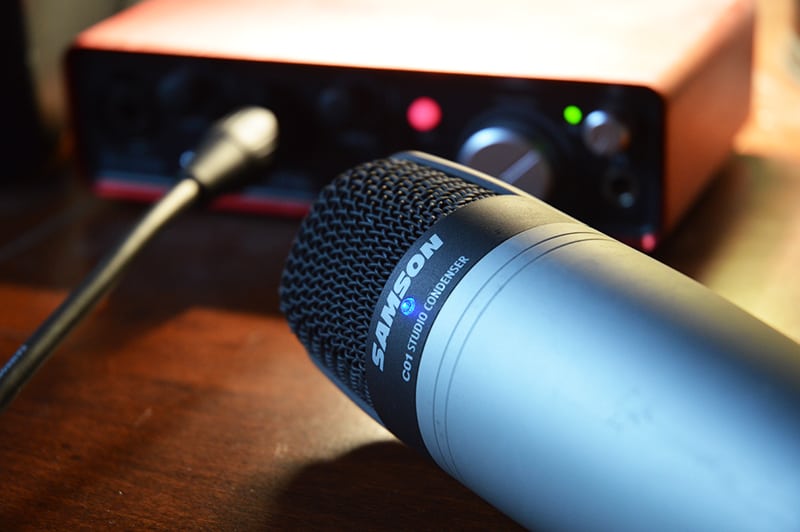 paired with the 2i2.

Another issue that I came across in reviews was that the person had an interface but still couldn’t figure out why the mic wouldn’t work.

Why? Because they didn’t initiate the 48v phantom power switch on the interface. This is what enables your mic to be powered ON. Make sure to hit that button!

But what is 48v phantom power?

Simply put, it’s the power inside of your interface that gives the microphone enough juice to actually be heard! It amplifies the sound to a level that can be perceived by your brain (and ears :P). Instead of your computer doing all the work (USB), your interface does!

For more info on how your computer sends and receives data, check out my article on Bit depth vs. sample rate!

What’s also amazing is that the end goal of your interface is to send and receive data, by converting the analog signal into digital, and vice versa.

When you scream obscenities into the mic, your computer becomes sad and offended, 🙁 but that doesn’t distract it from its primary goal.

Think of it as prioritizing time and writing a list. The tasks are separate and must be done on their own.

Your A/D converter (inside your interface), captures and quantizes these values (samples) at a fixed rate, and of a specified size. Each piece of data contains parameters that are used in accurately reproducing the original sound. The way your computer does this is by copying the original values and then playing them back in the same order and rate at which they were captured.

Check out my video below on the process!

Yeah, it’s pretty heavy stuff. Thankfully you don’t really need to be all that concerned with it. All you need is what we just talked about:

This is the final component of your DAW (Digital Audio workstation) mentioned above at the start. It’s what you need in order to actually lay down those sweet vocals!

When starting out, it can become overwhelming and frustrating to find one that is easy to use and affordable (OR FREE! 🙂

It took me quite a while to not only find one but to learn how to use it.

One thing to keep in mind…

For the best recording software

Reaper has come up in every search I have made. A good friend of mine also swears by it, as you can learn the product over a period of 30 days free of charge, before making the decision to buy it. Highly recommended.

Setting up an XLR condenser mic is very simple, but the process is overlooked by many people. Just know that you will need to:

Well, that’s about it for today my friend! I hope you now have a better understanding about the difference between a USB microphone and an XLR microphone, and perhaps now know which may suit you best!

Which type of microphone sounds more appealing? Would you rather go the XLR route or the USB route? Let me know!!

If you have any other questions or need me to clear something up, I would be more than happy to speak with you. Otherwise…

CHECK OUT MY #1 RECOMMENDATION FOR AN AUDIO INTERFACE!

Should you buy the Sennheiser HD 598? | A DEFINITIVE ANSWER!

Phantom 48vDC power. You’ve not idea what you’re on about. Ever studied electronics? Worked in a studio? Worked live? Studied physics? Phantom power supplies a 48vDC polarisation potential difference between the front and rear perforated plates of a condenser microphone. It’s nothing to do with gain or anything else.

Could you point out the part of the article where I mention gain and 48v phantom power? I couldn’t find it. If you can point out a false statement in the article I’d be happy to fix it.

Beginners who visit this site simply need to know what phantom power is and I outlined that in the post. Your overly technical definition doesn’t really help out someone new; it will probably just confuse them. I’d much rather use Shure’s definition from their website:

“Phantom power is a DC voltage (usually 12-48 volts) used to power the electronics of a condenser microphone. For some (non-electret) condensers it may also be used to provide the polarizing voltage for the element itself. This voltage is supplied through the microphone cable by a mixer equipped with phantom power or by some type of in-line external source.”

My definition: “It’s the power inside of your interface that gives the microphone enough juice to be heard.”

Don’t really see anything wrong with that statement.

That said, thank you so much for your comment! I will be sure to go back and improve upon this 4 year old article (2015), and make it the best it can possibly be.

Thank you for your wit and brilliant writing! What a way to spice up my day, reading a short & sweet helpful article on XLR vs USB, and then seeing how you handle arrogant farts. It’s a jungle out there with the audio world, thank you for making it a little easier to handle 🙂

My pleasure Toby! Thanks so much for stopping by 🙂 Your comment reminded me to add a video in the article that I just did pretty recently. Def check it out for some laughs!!! Let me know what you think..