Aloha friend and Welcome aboard!!

Before we get into the Audio Technica ATH M50 vs. Beats comparison, grab a snack, sit back and relax because..

I’m going to give a blurb about some of my experiences with the M50, and then compare it to the Beats line with a recommendation towards the end. 🙂

The M50 has stuck with me since January of 2013, and it’s been a rock since then. Durability-wise, it’s up there with some of the best in my mind. Folding and moving in so many different ways has greatly contributed to its near-indestructible nature.

When I first put them on, I was so shocked at how good they sounded that I was convinced there wasn’t a headphone out there better. Over the years I’ve come to accept that the M50 was only the beginning.

They provide a pretty solid bass slam and plenty of high-end clarity, but the treble can get “essy” at times. In fact, I would probably EQ 9k down by a few decibels. It just ends up being too much of a good thing.

Aside from all that madness, the M50 is a bass head entry that will satisfy the hungriest of consumers. I consider it a high-end consumer headphone and not a “studio headphone” that it’s marketed as being.

The only real downside to the M50’s is the issue of the ear cups peeling, cracking, and hardening over time. While this is pretty standard across most headphones, it’s still a bit discouraging but something that we must live with. The good news is that you can easily replace them. I chose the Brainwavz HM5 pads. Do take note that while the HM5 pads will open up the Soundstage, the bass is more subdued. It’s still crisp, but it doesn’t have nearly the impact. Also, the treble might sizzle a little too much, as mentioned before with that 9k peak. If that’s an issue, you could always opt for these standard replacements. 🙂

The Wire (not the television show)

One thing to keep in mind is the wiring. It does tend to stiffen and harden over a period of time (2+ years). It’s not something to fret over but will happen. I’m not too sure if it affects the sound, but that’s always a possibility. I would have to demo a brand new model to see for sure. 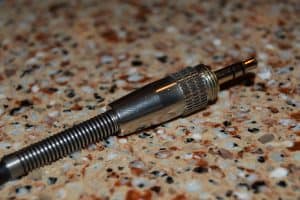 One of the most impressive things about the original M50 was the 3.5mm termination. Since I bought them, I’ve only come across one wire that employed the same type of strain relief, and that is the aftermarket NewFantasia Replacement Audio Upgrade Cable.

The jack on the M50 is one of the best ideas Audio Technica could have come up with. That’s why it’s a shame not to see it on the improved M50x. Oh well. If you were wondering the differences:

Other than that, the sound is very similar, and pretty much identical in my estimation. Now that all that’s out of the way, how does the Beats line measure up?

The Beats line contains, well, a lot of Beats headphones, most of which are duds, unfortunately.

Instead of comparing them all, I will give a quick outline of the Series, and then choose some of the better iterations as the basis for my analysis.

Whew! So how does the Solo 3 compare with the M50? Glad you asked.

Well, comrade, we’ve come to the end of another comparison. So what do I recommend?

Well, that’s a tough question, but I’ve got some solutions for you.

If you’re looking for a phenomenal, portable wireless Bluetooth option with a crisp sound and a slamming bass, look no further than the Beats Solo 3. Interested in learning more?

SEE THEM FOR YOURSELF ON AMAZON!!

What about a more affordable headphone? The M50x is a great solution if you’re looking for a high-end consumer headphone with plenty of bass slam. Between the M50 and 50x, both have massive amounts of reviews to back up the quality, and to this day it remains a more than a viable solution to your bass head needs. Interested?

SEE THE UPGRADED M50X FOR YOURSELF ON AMAZON

CHECK OUT MY OFFICIAL AUDIO TECHNICA ATH M50 REVIEW TO GET THE SKINNY!!

Looking for an audiophile type of bass head experience? The V-Moda Crossfade M100 gets everything right and is the go-to solution for the bass head looking for a more serious sound. Its treble is toned down, the bass is tight, slamming, and yet controlled, it’s comfortable and durable, and it’s got better instrument separation and detail than the aforementioned (above). Interested?

Well that’s about it for today my friend! I hope you’ve enjoyed this article on the Audio Technica ATH M50 vs. Beats comparison.

Which of these are you more likely to go with? I would love to hear from you. Until next time…