Skip to content
HomeHeadphone ComparisonsSennheiser HD 201 vs. HD 206 [With Video]

Before we get into the Sennheiser HD 201 vs. HD 206, grab a snack, kick back and relax because… 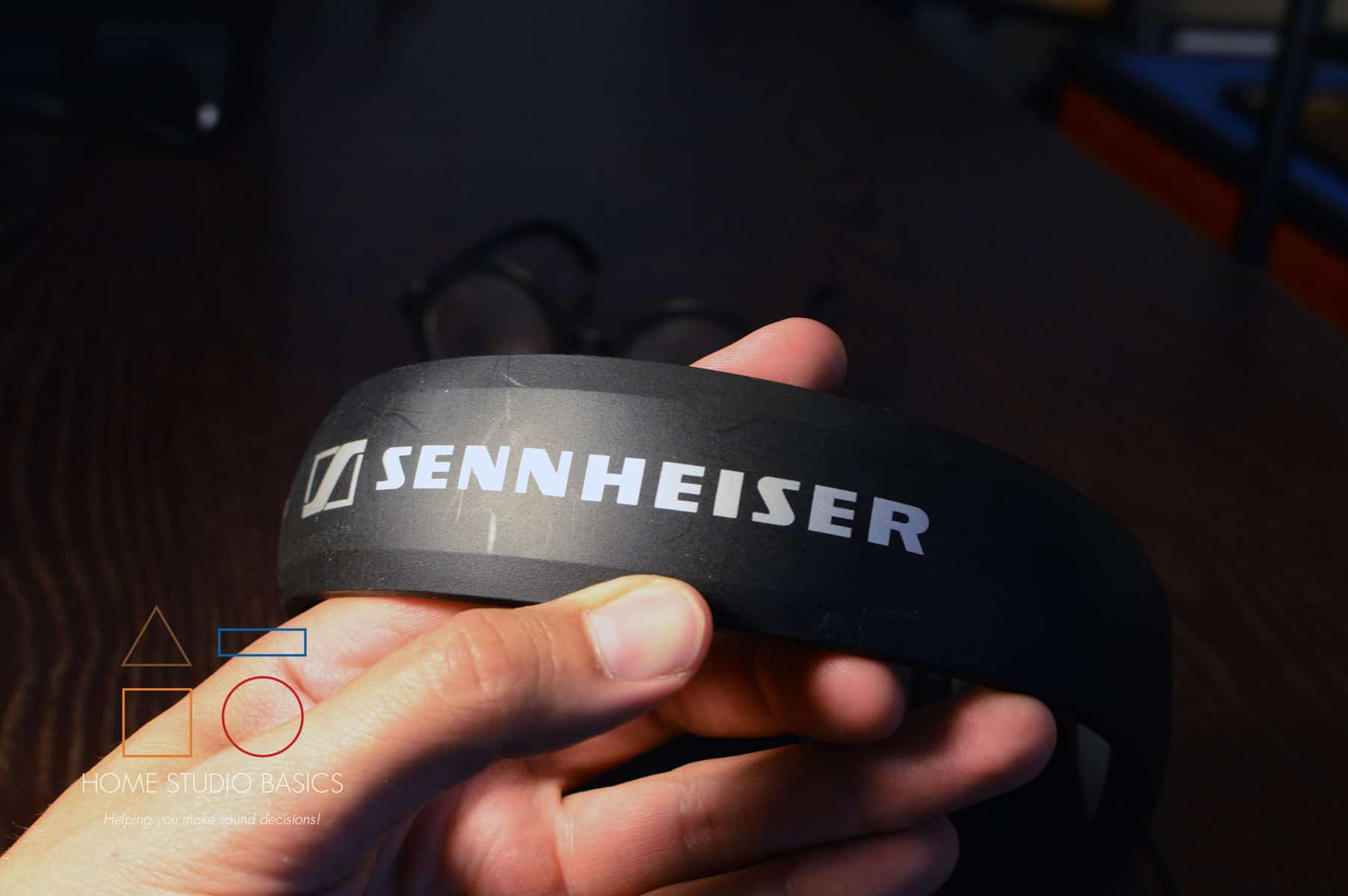 Because these headphones are basically identical, I’m just going to outline the HD 201 and give a quick comparison to the 206 towards the end. 🙂

The build of the HD 201 is rather flimsy, but users have reported owning these for a very long time without issue.

They aren’t quite as light as an AKG K240, but they are a tad wobbly and loose in your hand.

The unit is made of all plastic, with a non-detachable cable and faux leather padding.

The chord itself is rather thin and cheap feeling; it resembles and feels like something out of a 1990’s drug store (think Eckerd or Kerr Drug).

Likewise, the padding is very cheap as well. It’s the type of material prone to cracking and peeling over time, something akin to a Sony MDR V6’s pads.

The headband adjustment feels pretty solid, however, and I’m not that worried about these breaking down. They feel like they could withstand some abuse despite feeling rather underwhelming to hold. 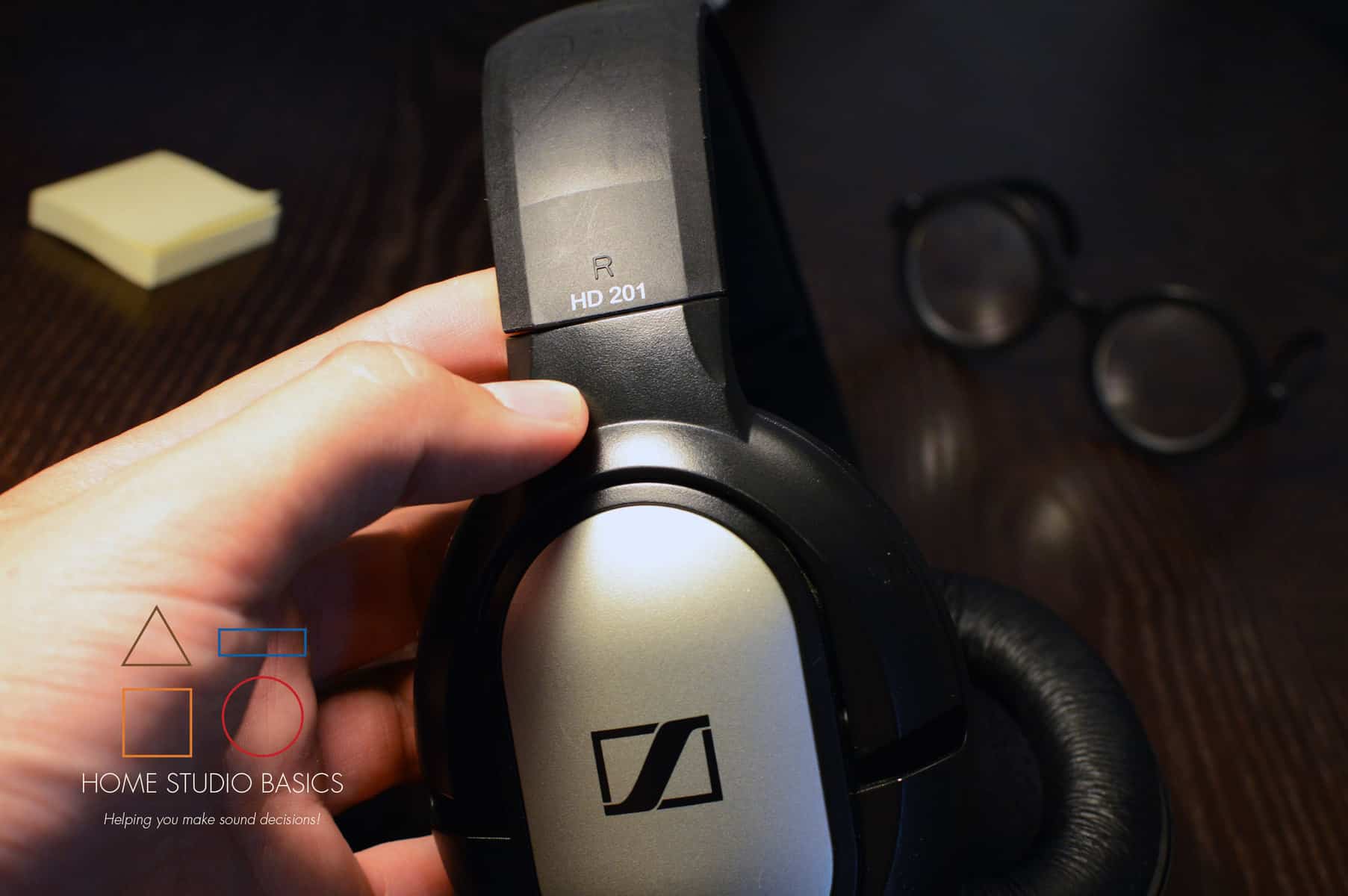 Consider this snippet from an Amazon review:

I have an old 8-year-old pair of HD201 (which I am highly satisfied with) and just purchased these to try out. The cable insulation on my 201’s has almost entirely shredded away so figured it was time for a new pair. Jose Navarro, Amazon Reviewer

I’ve owned 2 separate pairs of HD 201’s, and each time I felt like they would last a long time even though I didn’t hold onto them for a long time. I gave the first pair away and sold the second pair.

For the price, the build isn’t too shabby! 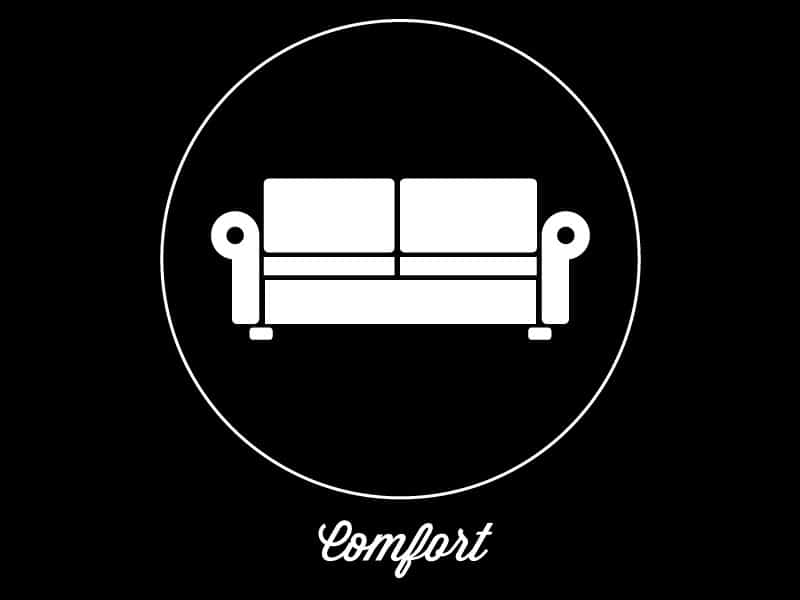 Comfort is a bit dicey, as you’re not going to be able to wear these for long periods of time without some adjustments.

The main problem is that they tend to make your ears hot and/or sore. They kind of dig in all the wrong places, causing fatigue after a semi-short listening session.

Clamp force is rather good, but the headband also digs a bit more than I’d like into the top of my head. I’m finding myself making adjustments there as well.

The fit is also not quite what I would consider Circumaural (Around the Ear). It’s more of a hybrid Circumaural + Supra-Aural (On-Ear). This in part contributes to its somewhat lacking comfort levels.

What about sound and Imaging?

Fortunately, the sound of the HD 201 is its saving grace. I talk in my video about how this is what a Drug Store headphone experience should have been like growing up in the ’90s.

I remember the quality of those headsets was horrible, but it was all we had. We made it work. I don’t ever remember complaining about it either.

Back then it was more about the music and not the gear. Today it’s different. We’re obsessed with the product itself rather than the experience it provides us. This isn’t always the case, but the sheer amount of crap for sale says otherwise.

People have an obsession with “stuff”, and audiophiles are no different. Companies understand this and latch onto it. That’s why there’s an overabundance of everything. They know we’ll never be satisfied, so they feed on that.

That said, I like the sound of the HD 201. I dogged this headphone quite a bit back in 2015, but I think it represents what a $20 headphone should sound like.

The caveats here are that the treble can sometimes sound kind of grainy and artificial as if it’s struggling to keep up.

The other issue is the mid-range: it just sounds too forward and in your face at times.

Other than that, the headphone provides a strong sense of detail retrieval, clarity, and instrument separation. If this is your first foray into audiophile land, you won’t be disappointed.

What HIFI provided a nice snapshot of this headphone’s sound:

It would be entirely understandable to expect inferior sound from a pair of headphones costing £17, but while the HD 201s are far from the best we’ve heard, they are surprisingly competent performers. Their key strengths are insight and balance. The level of clarity is such that instruments and vocals, while not as explicit as we might like, are apparent enough to paint a fairly detailed picture. It’s not the sort of fine detail that lets you identify exactly what’s going on, but it’s not broad, mushy strokes, either. Leading edges are solid enough to do the job.What HIFI?

The soundstage itself isn’t that great, but that’s kind of to be expected out of a closed-back headphone such as this one.

Still, you’re going to get a nice sense of spacing, even though the music itself doesn’t really take on a 3-D like quality (something you’d find in a more expensive open-back headphone).

Let’s take a break and watch my review! 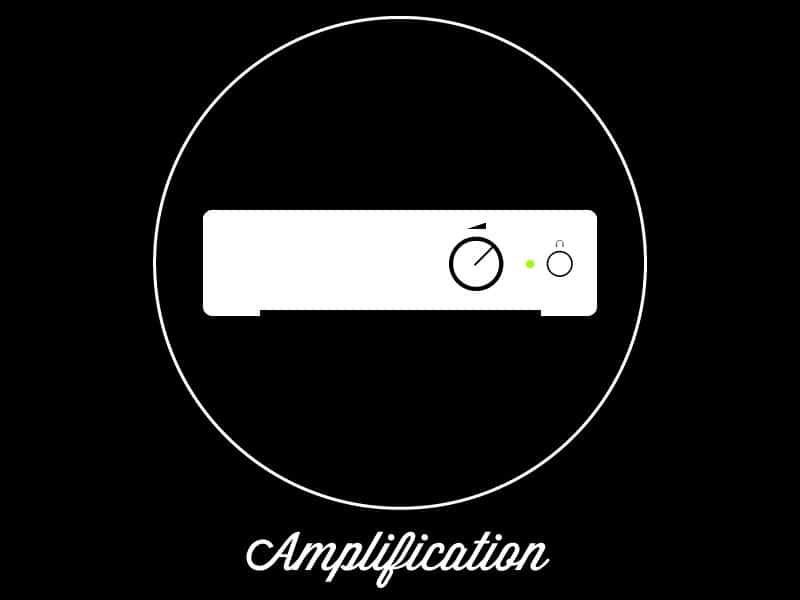 In short, the HD 201 won’t need any but could benefit.

Its low impedance and high sensitivity make it so it can be driven right out of a smartphone or laptop.

If you do want to get some separate amplification, I’d probably wait until you upgrade to something like a Sony MDR V6 – it’s not going to really be worth it with the 201.

I say this because pushing a 201 is asking for harmonic distortion. It simply struggles to keep up and is best listened to at lower volumes.

In the official video, I mention the E10K, which I think would be the maximum of what you should pay for an Amp/DAC. What is a USB DAC?

So what kind of genres work best? 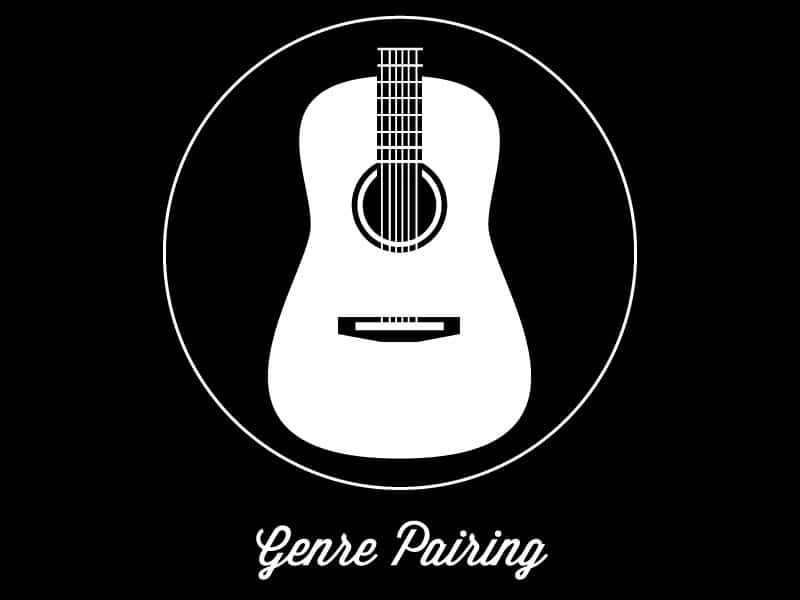 Really anything that is kind of more on the quiet side: Acoustic, Jazz, Classical, Folk, etc. will all sound great with the 201.

Rock, Hip-Hop, and EDM also sound pretty good but as I said, the HD 201’s transients aren’t all that great. You’ll find it start to sound kind of lacking in terms of speed and decay.

Even so, the 201 does excel really well as your budget mixing, mastering, and reference headphone. You’ll be able to hear nearly all of what’s going on, finding flaws in the recording fairly quickly. This is what makes it a nice option for beginning sound engineers and beatmakers.

If this had been my first mixing headphone I wouldn’t have complained at all. It gets the job done just fine.

All in all, stick to softer stuff with the occasional harder song and you should be okay. I’m just not advocating these with really intense music is all.

So what are the similarities and differences between the 201 and 206?

In short, these 2 headphones are identical in appearance, weight, comfort, and sound (to an extent).

The only real difference is that the headband is a bit more narrow.

I bought this to replace a set of 201 as they are now discontinued and very expensive for what they are. The 206 only differs in that the headband is a good bit narrower. I removed the band from my 201 and used the new speakers on it, as the 206 has a good bit more pressure on the head and is not nearly as comfortable for extended periods. They both have the same speakers.Cigar Obsession, Amazon Reviewer

Other than that, the sound is identical to the HD 201, with perhaps a bit of a subtle bass boost.

The 206 and 201’s are virtually an identical product. The only difference is a VERY subtle boost in the bass—but even that might just be the result of the pair being brand new. Both shine in the mids and highs with very clear, even sound. If you are looking to have your eardrums massaged with bass drops, these aren’t the pair for you. Great for orchestral/complex instrumentals and vocal tracks. Also, they fit comfortably around the ear and don’t press tightly against them. Although they do a decent job containing sound so that it doesn’t leak much to people around you. These (and 201s) are the best headphones for under $40 you’ll find anywhere.Jose Navarro, Amazon Reviewer

While I do still enjoy the sound of the HD 201, the 206 is obviously not an upgrade. The headphones are basically identical.

What do I recommend?

I think you should save some money and go with a true entry-level reference headphone. Something like a Sony MDR V6 is going to be a pretty significant step up from either of these.

The sound is markedly better in all aspects: Bass, mid-range, and treble are all an immense improvement. The build is also better on a V6. It provides peace of mind because the headphone itself folds and contorts in a myriad of ways and is built out of better materials.

Comfort is a little bit better too, but you’ll find that the sound is absolutely phenomenal for the price. A headphone of the mid ’80s, the V6 is a product that has stood the test of time for many years and still remains in production to this day (IIRC).

I firmly believe every audio engineer, producer, and music enthusiast should have one as it represents your first taste of good sound. If you’re anything like me, you’ll never be the same after you hear it.

I’ll leave you with a couple of quotes from guys I recommended the V6 to, which can be found on the front page. These are also people I still keep in contact with!

“I wanted to post this here so hopefully you see it. We were talking in the comments section of your HD25 review about whether to get those or the V6’s. I bought the V6’s and love them even for casual listening. I like them better than my HD 598’s in that regard actually. I’m a huge fan of your website and YouTube channel my dude, thanks so much for the help. It’s great that you actually engage with the people that follow you and help them out. Keep up the great work! You provide a great service for beginners like me. Thank you so much!”Brennan Parker
“I just received my mdr-v6 in the mail. They are so much better than my wireless Sony headphones that cost the same… lol. Thank you for helping me with the purchase!”Universe Man Music

Well, that’s about it for today folks! I hope you’ve enjoyed this Sennheiser HD 201 vs. HD 206 Review & Comparison.

Would you invest in a Sony MDR V6? Be sure to let me know down below!!

Questions? Comments? Requests? Did I miss the mark on something? Let me know in the comments below or contact me!! I would love to hear from you…