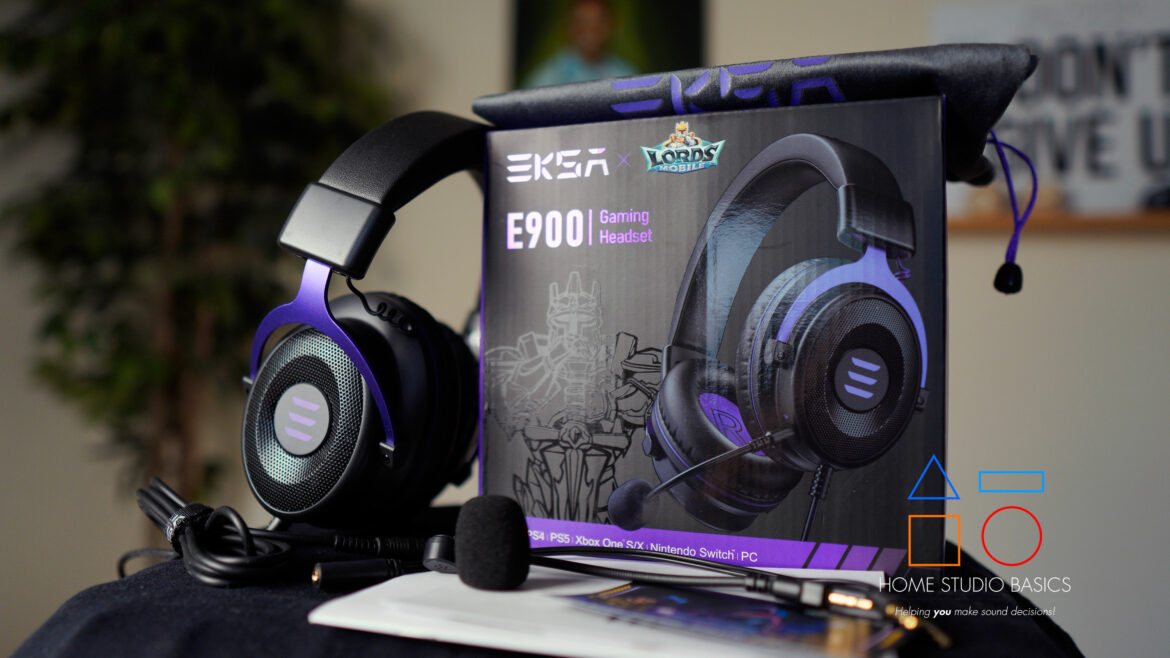 I would like to thank EKSA for sending the E900 to review, but also for sending 2 of their fantastic RBG stands as well! I will leave some images at the very end.

Full disclosure: This is a paid review but I made it clear to them that I do not guarantee positive reviews or recommendations – I make in-depth, honest evaluations based on my impressions and the ultimate value that the product may or may not provide.

Greetings mate and Welcome aboard! Stuart Charles here, HomeStudioBasics.com helping YOU make sound decisions leading to a beautiful audio experience that will make you fall in love with music (NOT gear) all over again, so… I suppose I’m a bit spoiled at this point, considering I’ve already heard the EKSA StarEngine E5000 gaming headset and really enjoyed it.

In fact, it kind of changed my mind a little about headsets in general, as I always kind of recommended that people steer clear of them.

This is due to the fact that not only have I accrued a lot of experience in the hobby (demoing or owning over 115 headphones) but also because I’ve been burned in the past after buying some cheap crap from Turtle Beach only to have it break down on me within a few months.

Of course, that was back in 2011 or thereabouts, but suffice to say I haven’t even sniffed one since; that is, until EKSA reached out and offered to send me a few of them – the first being the E5000.

Today we’ll take a look at their entry-level E900 and find out if it’s worth a purchase.

Let’s start with the build. I won’t sugarcoat it; it is light and does seem a bit cheap, but I don’t necessarily see it breaking down or anything.

Time will tell on that front, but I suppose for the price it feels okay.

The top of the headband dons EKSA’s engraved logo, and the Beyerdynamic Esque Christian Bale (haha, get it?) mechanisms actually aren’t plastic which is fairly surprising at this price point.

It’s a steel arm adjustment and feels rather solid all things considered.

The cups are oval-shaped and look like an open-backed variety, but I believe this is actually a closed-back headphone.

On the left cup, we’ve got a non-detachable cable and detachable mic slot, with leatherette padding and replaceable ear muffs.

The inside of the cups reveals block “R” and “L”  indicators which come in handy as you’ll quickly be able to determine which side is which.

The cable itself contains a mic mute switch and a volume dial, both of which are pretty convenient.

EKSA also includes a splitter which I found useful since I’m rocking the Creative SoundBlasterX G6. Comfort is okay, but the oval-shaped cups are a tad small and I definitely start to feel these on my head after about an hour or so.

They also clamp rather hard, but time will tell if they open up over time.

The mic quality is surprisingly decent for the price, and I’ll leave a demo I did here.

Do note that I also included the B130 by Supsoo which I’m also demoing. The E900 comes right after at 55 seconds.

Given that I can stretch the headband out some, I’d imagine these can and will become less clampy as I use them more. As good as all that was, my main gripe with these is their sound; coming from the E5000, these feel and sound very boxed in and the overall sound quality is indicative of their price.

In other words, I don’t think I would feel comfortable using them in competitive gaming situations due to their somewhat claustrophobic nature.

Put another way, if I had to quickly place footsteps or sounds while preparing for a gun battle, I don’t think I’d be able to with any sort of certainty.

This should become apparent to anyone with extensive gaming experience in the competitive arena.

That’s not to say I didn’t have a blast with them; I went 65-0 on the second hardest difficulty and pulled a 112-11 on the highest difficulty playing domination vs. bots.

I’ll leave those games towards the end for your viewing enjoyment.

Before I give a final verdict, let’s go over some things I liked and disliked about this set:

What can be improved To be clear, this is pretty much as bare bones as it gets.

Aside from the headphones and the Carry bag, there isn’t much to the package other than the obligatory microphone.

For $30-$40 more, I think the E5000 is a much better overall value and is something I could see myself using (which is why I ultimately recommended it).

In other words, the E5000 feels like a quality gaming headset in every sense of the word and I’m more than excited to endorse it because it’s packed with value.

To me, it’s an average headset and I wouldn’t drop the money on it regardless of the fact that it’s so cheap.

I’d much rather you save a tiny bit of extra dough and go with something that I truly feel confident you’ll love.

In this first one, I had the bots on the 2nd highest difficulty – Hardened. This game would be the equivalent of facing pretty bad players and having everything go your way.

In this second one, I had the bots on the highest difficulty – Veteran. This game would be the equivalent of facing decent players and having mostly everything go your way. Players familiar with Call of Duty 4: Modern Warfare (2007) and Black Ops (2010) will likely find my imitation of “Capture the Objective” and “Enemy took Alpha!” rather humorous. xD

Well, that’s about it for today folks! I hope you’ve enjoyed this EKSA E900 review and came away with some valuable insight.

Is the E900 worth a purchase to YOU? Do you have any experience with gaming headsets? I’d love to hear from you. Until next time…

EKSA StarEngine E5000 Review – To Infinity, And Beyond?