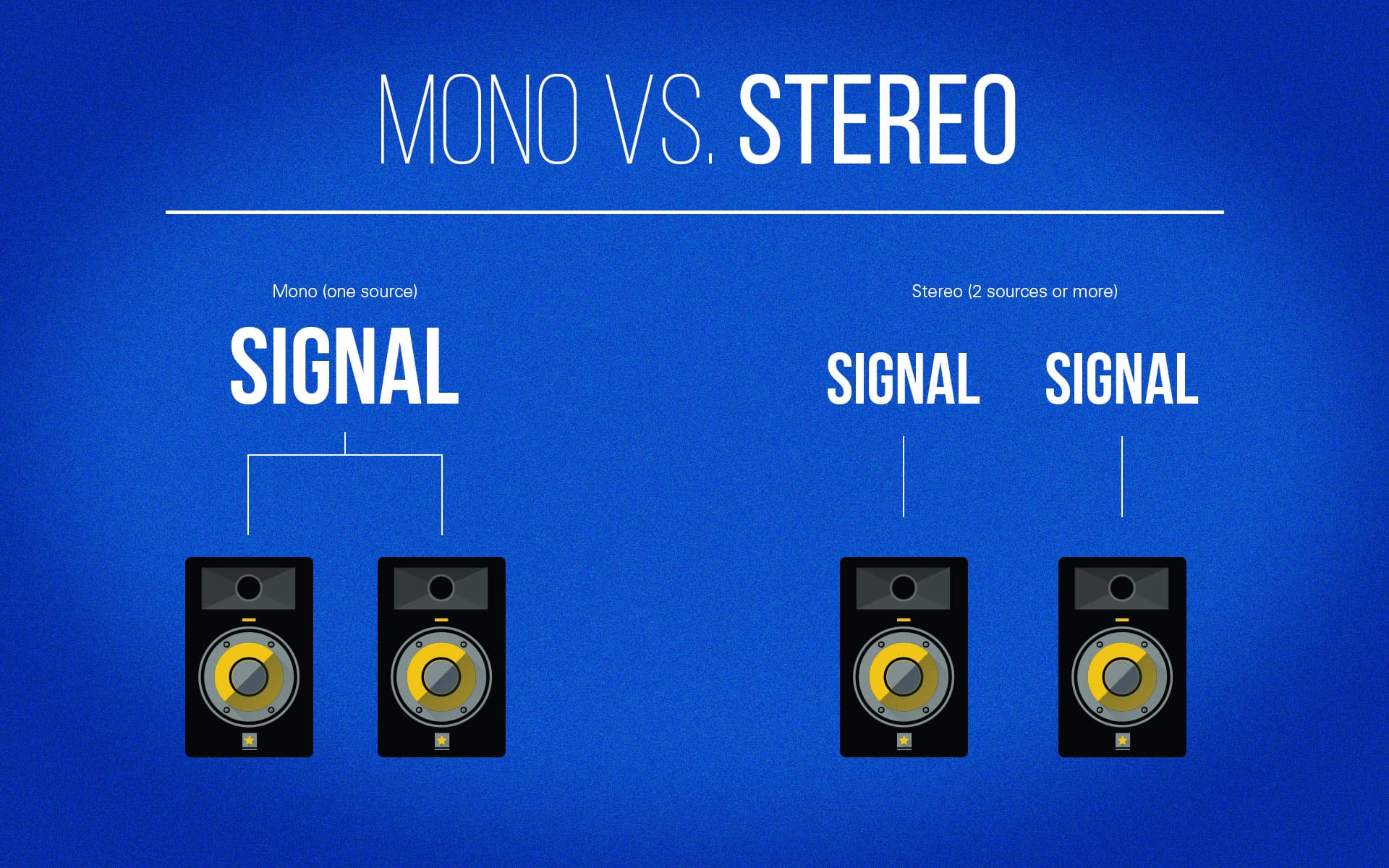 Greetings bass head and Welcome aboard!

Stuart Charles here, HomeStudioBasics.com helping you make sound decisions leading to a beautiful audio experience that will make you fall in love with music, all over again, so…

Back in the day, people actually used to listen to music through a single speaker with a completely centered image of all the sounds. This is what was known as a mono listening environment.

Mono is derived from one signal and sent to 1 or 2 speakers. In a mono recording, you may have multiple speakers playing the song, but each speaker is playing the same exact copy of the sound.

Stereo is derived from 2 or more signals and sent to 2-channels through 2 speakers.

Before the advent of stereo, humans weren’t satisfied (big surprise there lol) and instead decided that having 2 channels to evenly distribute the audio would be a more ideal scenario.

And who can argue?

2-channel stereo is what my local Audio Advice in Raleigh, N.C. founded their business on. It’s what our brain prefers when listening to music.

Some sounds are panned left, some right and some are evenly distributed across both.

The same concept applies when you’re mixing down a track with near-field studio monitors; you position them in an equilateral triangle towards your head at ear level. What are Studio Monitors?

This creates the illusion in your mind that the sound is coming from the middle, creating a nice center image for you to work with.

What’s interesting is the shift from 78’s, to LP’s in monophonic, to stereophonic:

There’s a reason for this gradual change. Let’s just say that both collectors and engineers entered into a more complex world once stereo technology was introduced to consumers. To play a stereo record, collectors initially needed specialized setups, or they would risk damaging their equipment and records. On the production side, there was a steep learning curve and added expenses for releasing stereo records. Albums originally released in this purgatory period between 1958 and 1970 – when many albums were produced in both mono and stereo versions, in varying degrees of quality – require some extra consideration from collectors. To those interested in history, this is perhaps one of the most exciting eras in vinyl records. To decide which version is best suited for your collection, you’ll need to research how a record was originally recorded, mixed, and released.Discogs

That sort of thing is an afterthought nowadays; a true testament to how far technology has progressed.

What’s even more interesting is that even a record labeled “stereo” may not have actually been a true stereo recording. Engineers could simply record all the instruments in mono and then pan them around to create the image.

More often than not, actual listeners prefer recordings in mono because the song is given more weight and impact.

Recording in stereo is ideal because it allows the producer to highlight what’s most important in that phantom center image – the one we discussed above that’s created by a left/right speaker setup.

Listening in stereo is also ideal because the artist can create a sense of spacing, with, depth, and height, all referred to as the Soundstage – something Audiophiles love when listening with headphones. What is Soundstage? [Detailed Explanation]

Headphones like the AKG K702 attempt to create a sense of space; as if you were immersed in the environment or studio rather than just hearing it as a recorded song. This effect helps when you’re gaming in a multi-player environment too, as you can hear sounds in all directions: footsteps, reloads, noise, etc. It tends to give you an advantage over other players who may not be utilizing a headphone with these qualities.

Here are 2 recordings of Pink Floyd’s “Interstellar Overdrive”, one in Mono and the other in Stereo. The guitar pan around 8:40 for the stereo version still freaks me out to this day.

What do you think?

I personally think this is really interesting. Notice how in the stereo version you can’t even hear Wright’s organ. What a crying shame. He was an integral part of the band and never got enough credit for his amazing contributions. It’s simply astounding to me the difference once I really concentrate on the composition and the instruments therein.

The cool part about the stereo version is of course the panning towards the end – trippy and psychedelic, man!

In recording with a microphone, similar principles apply:

If you’re simply recording your voice with one mic, you’ll record in mono.

If you’re recording an acoustic guitar using 2 microphones, you’ll record in stereo via whatever program you’re using (Audacity for example). You will need an audio interface with 2 separate XLR inputs for this. An example would be a Focusrite Scarlett 2i2.

A microphone like the Blue Yeti offers the flexibility of being able to record in stereo via an onboard switch. True stereo? Not really. But for $100 I can’t really complain. Here’s a cool take I did of The Beatles’ “Day In The Life” using stereo mode on the Yeti. It separated my voice and the guitar decently well.

This was for demo purposes only. I probably wouldn’t rely on a Yeti to do any serious recording, but it came out pretty good nonetheless. 🙂

Well, that’s about it for today my friend! I hope you’ve enjoyed this discussion on Stereo vs. Mono, and came away with some valuable insight.

Do you prefer listening in stereo or mono? I would love to hear from you. Until next time…

Some jazz and acoustic music can sound better to me in mono, but overall I prefer Stereo. I miss Quadrophonic Stereo most of all. I enjoy the sense of space that stereo brings and being able to place the different instruments on the stage(if it is well recorded). C.W. Stoneking did an amazing album a couple of years ago with the entire band playing live into a single microphone direct to tape. Haunting and timeless tunes https://www.youtube.com/watch?v=aikOVPt50jU

Yeah, I think I feel the same way. That Floyd track sounded great in Mono though because I could actually hear Wright’s organ. Other than that, I do prefer Stereo because of what you said about Soundstage. I think the headphone guys like us will probably mostly prefer that vs. layering, but I could be wrong. I commented to a guy on YouTube about it saying as much. They seemed to be old-school Mono guys dumping all over Stereo lol. I can definitely see their point about certain tracks. I’ve heard that Floyd track hundreds of times and can’t believe I never heard the organ. That’s crazy to me.