Hi friend and Welcome aboard!

Today I wanted to cover a topic that isn’t really thought about or talked about much. The concept of bit depth vs. sample rate.

Sometimes when comparing audio interfaces, we come across these numbers that are thrown around all willy nilly, but in reality, don’t mean much. We like to think that we have an understanding of what specifications are better than another, and we buy based on that limited knowledge.

That said, there has become a standard for entry-level audio interfaces that you will find is very common among many of the recommended choices.

These numbers will never be the same for every interface. There are some that do have similar numbers, but when you get into the higher end equipment there will be more of a discrepancy.

What the heck does it all mean Basil!

Just click on this button here which will direct you to a page where you can input your credit card infor… JUST KIDDING!! 😀 😛

Ok, let’s get right down to it.

As we discussed in the audio interface portion of building your home studio, an interface’s primary function is to send and receive data. It also converts analog data into digital (and vice versa), so your computer (and you) can understand what the heck is going on. When you scream obscenities into your microphone, your computer becomes sad and offended, but that doesn’t distract it from its primary goal. 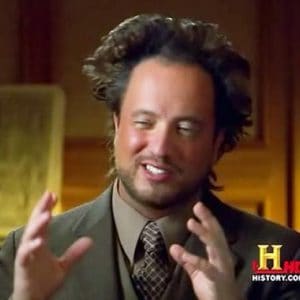 Think of it like prioritizing time and writing a list. The tasks are separate and must be done on their own.

Your A/D converter or DAC (inside your interface), captures and quantizes these values (samples) at a fixed rate, and of a specified size. Each piece of data contains parameters that are used in accurately reproducing the original sound. The way your computer does this is by copying the original values and then playing them back in the same order and rate at which they were captured.

As stated earlier, a computer understands language in terms of 1’s and 0’s. This is called binary language, and a string of binary digits is thus used to describe any sort of information that a computer receives. These digits are formed from bits and can range anywhere from 8, to 16, to 24, and so on.

As far as bit depth goes, the higher the better. Working with a high number ensures that the wavelengths are reproduced accurately and precisely. This means that more subtle fluctuations in the sound can be measured, contributing to the overall quality of its recreation. The lower the bit depth, the more information gets lost, and thus the crappier the sound.

In layman’s terms, if you are recording at 96 kHz, the highest frequency will only top off at 48kHz. The Nyquist-Shannon sampling theorem says that the upper magnitude of a piece of digital audio will top out at half the sample rate. In theory, a typical human with great hearing can only hear at about 20kHz.

The standard for interfaces used to be 40kHz. The standard in recent years has gradually become 24bit/96kHz, which is now what is considered “high resolution”. In the future, these numbers can and probably will change.

Update: Sure enough, they have changed. But not for the better. What Is DSD In Audio?

Even if your files are only 44.1kHz, it’s not really a big deal. The differences above 96kHz are pretty much negligible and 99% of the time 44.1 is completely fine. Remember, there are very few people that can even hear above 20kHz.

What does this mean?

It means that these numbers are a little overrated Basil.

There is actually a theory that says that the audio we don’t hear has an effect on what we do hear. So nerds, audiophiles, and geeks have since come to the conclusion that the audio is improved in a way that we cannot perceive.

What is more important than numbers?

Glad you asked. In reality, you shouldn’t stress over the sample rate at all really. The quality of the source (i.e. how it was recorded, mixed, and mastered) is much more important and will make all the difference in how good the music sounds.

The main reason that higher sample rates sound better is because of poorly implemented anti-aliasing filters. This is because they contain artifacts that show up inside the range of human hearing.

If I were to use a higher quality source file (say 24 bit/96kHz) with a crappy DAC like my Laptops internal Soundcard, it would sound better, because those artifacts get filtered out due to the fact that they will only show up outside of the range of human hearing. What is a Soundcard?

The conclusion is, that many people will tell you many things. There are differing opinions across the spectrum on this topic, but one thing for certain remains:

The differences are VERY SUBTLE. That said, it is advantageous to have 24 bit. Not because it will make your sound better, but because you will have more headroom and a better noise floor. In essence, your sound will have more room to breathe in the digital realm. Also, fewer bits of data will be lost overall with 24-bit, so it’s best to try and stick with that number as much as possible.

If you guys have any questions or comments, please contact me! If you feel this article could be improved in some way or have something that you think I should add, LET ME KNOW AS WELL!! 🙂

Basil, not bazzle. Great article though. Thank you, I was wavering between the Yeti and Yeti Pro.

Haha thanks for that clarification! Glad you arrived at a decision though. Please let me know how you like the Yeti.

Human beings can actually hear (not just theoretically) only up to 20kHz when they are kids and have perfectly functioning ears. Adults can unlikely hear above 15kHz, therefore a sampling rate of 96kHz is just a way to show off more expensive pieces of equipment, but the quality is nothing better than a 48kHz recording. (Source: applied acoustics professor and acoustics engineer – me)

Interesting! I’m sure there are still adults who can hear 20 though. I think it just depends more so on the individual. I agree about companies wanting to show off though. Seems to come with the territory nowadays. Thanks for stopping by!

Hey man! That’s quite a loaded question haha. The thing about it is that the human range of hearing is actually very limited. We cannot hear over 20kHz, no matter what some audiophile snob claims. The Nyquist Shannon Theorem says that the upper magnitude of a piece of digital audio still only tops out at half the sample rate. That’s why 48kHZ and 44.1 are perfectly fine. They both top out right above that threshold – 24 and 22 respectively. People like to argue with me on this but it’s pretty clear: Any DAC that advertises those outrageous sample rates is trying to scam you into buying into the “more is better” or FOMO (Fear of missing out) myth.

Bit depth is more important because it’s the amount of information being sampled. In that case, more is better for obvious reasons. I try to stick to 24/44, 24/48, or 24/96 if I’m running Tidal. 32? Even better. Just because a file samples that information at light speed doesn’t mean we can perceive it (and we can’t).

This is really eye-opening once you realize all the companies pushing their DSD and hi-res PCM dacs. It really doesn’t actually matter at all. When I make beats, the options are 44.1 and 48kHz buffer rate. That’s it. There’s no “384k” or 768. That’s all hogwash as far as I’m concerned. Here’s a great article about the DSD scam: https://www.cambridgeaudio.com/usa/en/blog/what-dsd

The basic gist is that DSD takes one bit of information and samples it millions of times a second vs. taking 32-bits and sampling thousands of times a second. The result is the exact same. You can replicate any DSD file with a standard PCM. That’s why I always tell people that DSD doesn’t matter at all. It’s even less relevant than hi-res PCM.