Recent
Gravastar Mars Pro Speaker Review – A Consumer’s...
Chord Mojo Review – Still Worth It In...
OneOdio A70 Review – An A71 Clone?
Sennheiser HD 598 Review – Expendable In 2022?
HIFIMAN HE400S Review – Better Alternative in 2022?
HIFIMAN DEVA Review – Best For Consumers In...
The HIFIMAN HE400i Will Change YOUR Life!
AudioQuest NightHawk Carbon Review – The Owl’s Evil...
Bowers & Wilkins P7 Review – A Closed...
EKSA H1 Review – Is This Bluetooth Headset...
Home Resources What Is DSD In Audio? – Is It Worth Pursuing?
Resources

What Is DSD In Audio? – Is It Worth Pursuing? 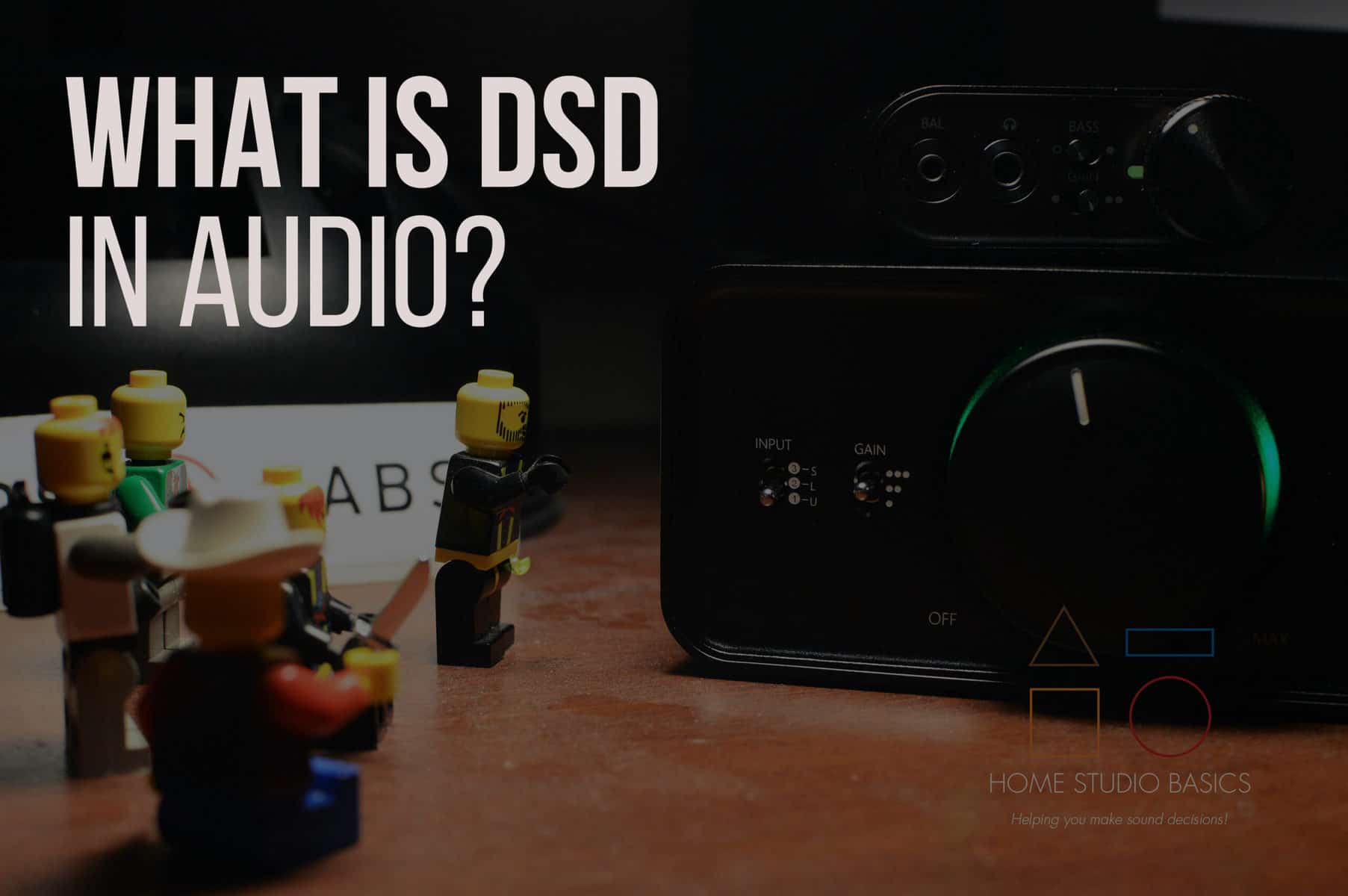 Greetings bass head and Welcome aboard! Stuart Charles here, HomeStudioBasics.com helping YOU make sound decisions leading to a beautiful audio experience that will make you fall in love with music, all over again soo…

What is DSD in Audio? 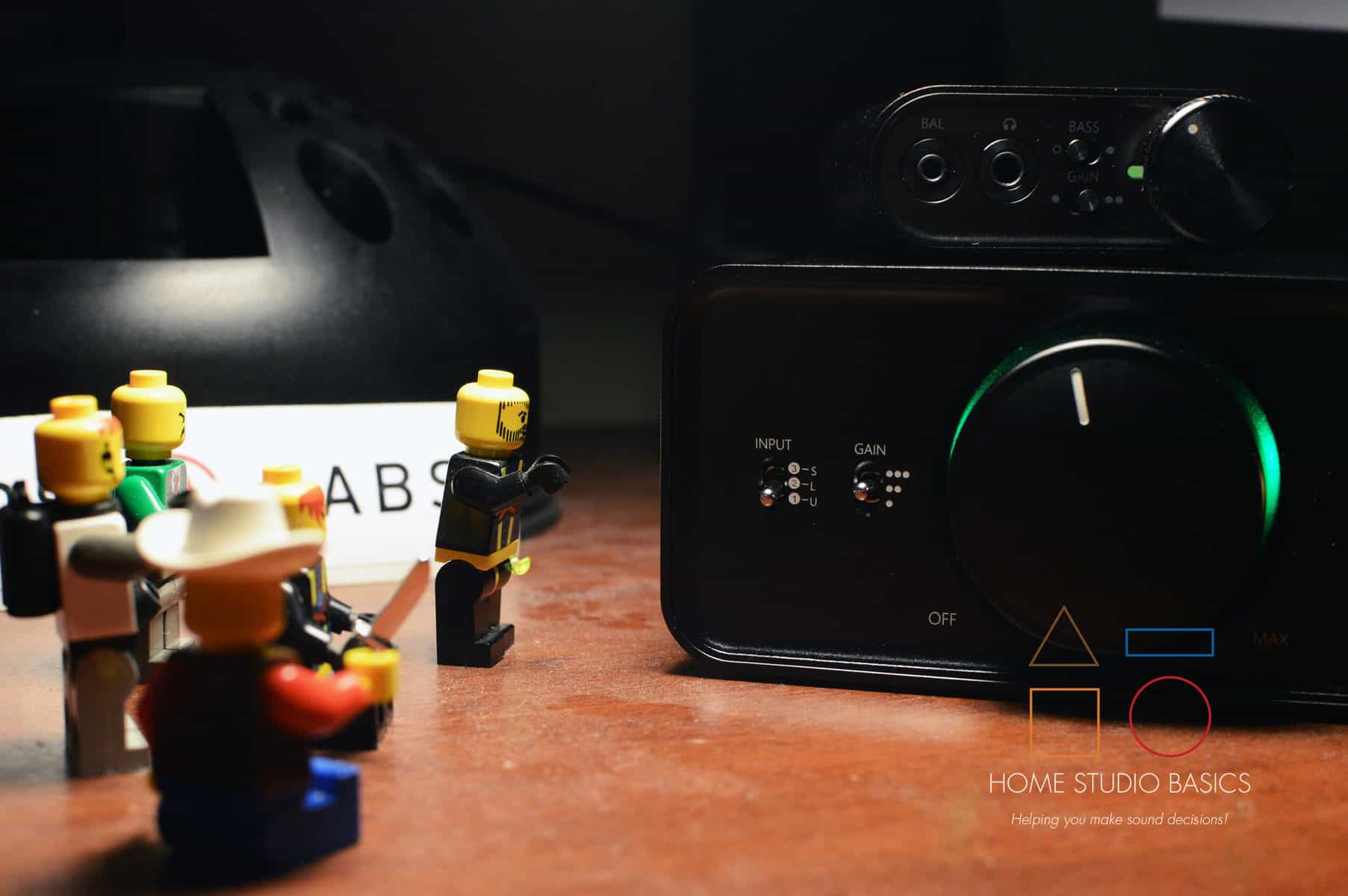 That’s a great question and it can be answered for the low low price of JUST KIDDING!

PCM stands for Pulse Code Modulation, a raw or uncompressed Analog to Digital Conversion. Related: What is a USB DAC?

A PCM file is simply the digital representation of that analog sound, much like any other audio file.

In a digital to analog conversion (DAC), the 1’s and 0’s that your PC understands get converted into the language your brain can understand. It’s basically what happens when you press play in Tidal or Spotify and hear music. Related: Tidal vs. Spotify [Definitive Guide]

When you’re recording into a microphone, the opposite happens. Your voice (analog) gets converted to the digital 1’s and 0’s so your computer can understand. You’re then able to make modifications via EQ and so forth. 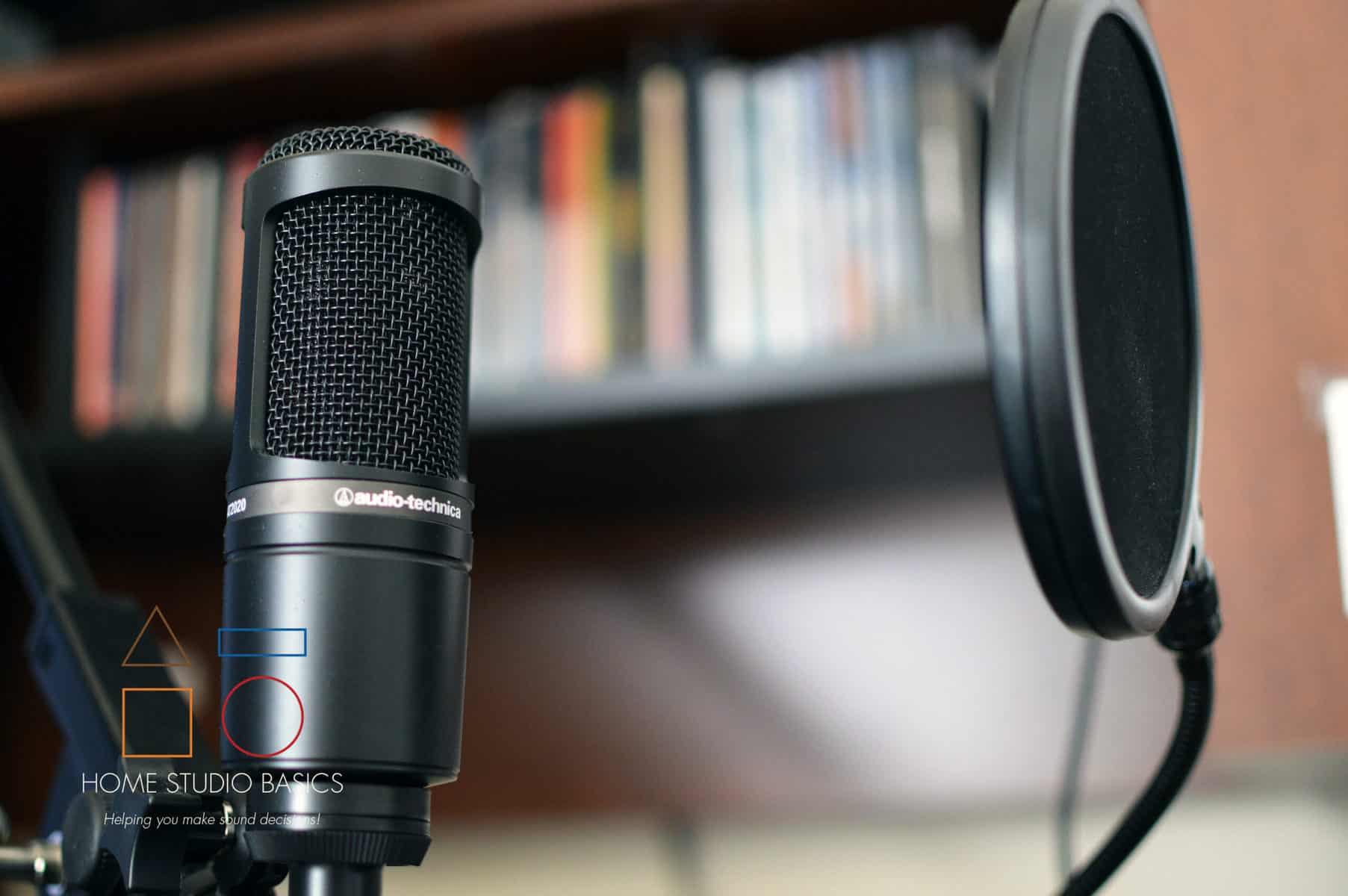 PCM files generally take 16-bits, 24-bits, or 32-bits of information and sample them thousands of times per second. When you see a DAC that supports PCM 24-bit/384kHz, or 32-bit/768, this is what it’s referring to.

There’s much debate on the subject, but bit depth is infinitely more important than sample rate for obvious reasons. The more information being sampled, the better. This means more details and subtleties in the music for your listening enjoyment.

This is where things get dicey though, and dare I say scammy:

The rate at which that information is sampled doesn’t matter nearly as much due to a couple of important concepts:

This is why I’m constantly trying to tell people not to get caught up in all of it. Imagine someone buying a DAC based on the fact that it supports 768k. It happens every day. I know it’s hard to believe, but there are actually people out there who will argue with you about this!

We call those people “Audiophiles.” They’re the ones who claim they can hear the grass growing. 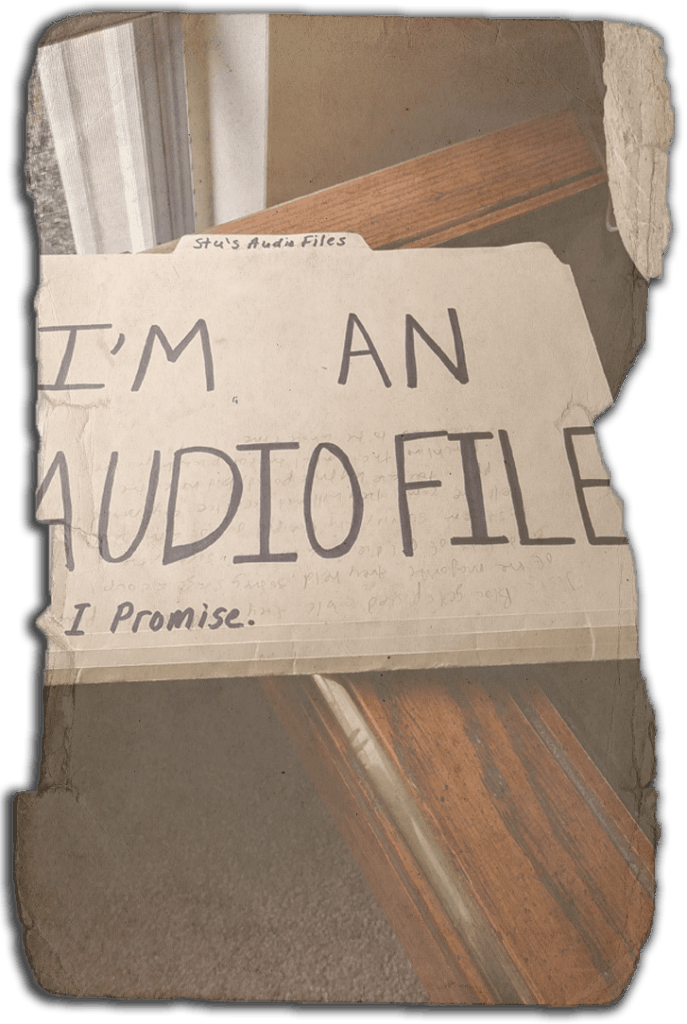 The famous “Audio File” gag, used in my videos for quite a while. Updated file to come!

In theory, this is supposed to result in better sound quality, but it’s a bit of a misnomer.

There are some important details worth knowing when making a comparison between DSD and a FLAC file, for example. The first is that DSD is not magically better than its rivals. A ‘standard’ DSD file- often referred to as DSD64 is roughly equivalent to a sample rate of 24/88.2kHz. ‘Double DSD’ or DSD128 samples that single bit of information 5.6 million times a second to give you a signal equivalent to 24/176.2kHz. Again, this is a sample rate that can be reproduced by formats that are not DSD. Higher rates exist but they are very, very rare. If anyone says that DSD is ‘better’ than other formats, the numbers don’t necessarily support that. Cambridge Audio

There you have it. Cambridge Audio put it more nicely and reader-friendly than I’m about to.

The disgusting part about it is that seemingly every company and their brother now advertises their DAC kits with these ridiculous numbers that don’t mean jack sh**.

It’s common sense, which sadly, a lot of people lack.

If all those fancy numbers on the back of the box make you feel good, then, by all means, buy the DAC. That’s your prerogative.

I personally recommend Amps & DACS based on a few important things, and my readers and followers have always appreciated me for it. What people need to understand is that pretty much all Amps & DACS sound good. That isn’t the issue. “The chinaman isn’t the issue here dude.”

Your problem of which to choose can be solved by considering the following: 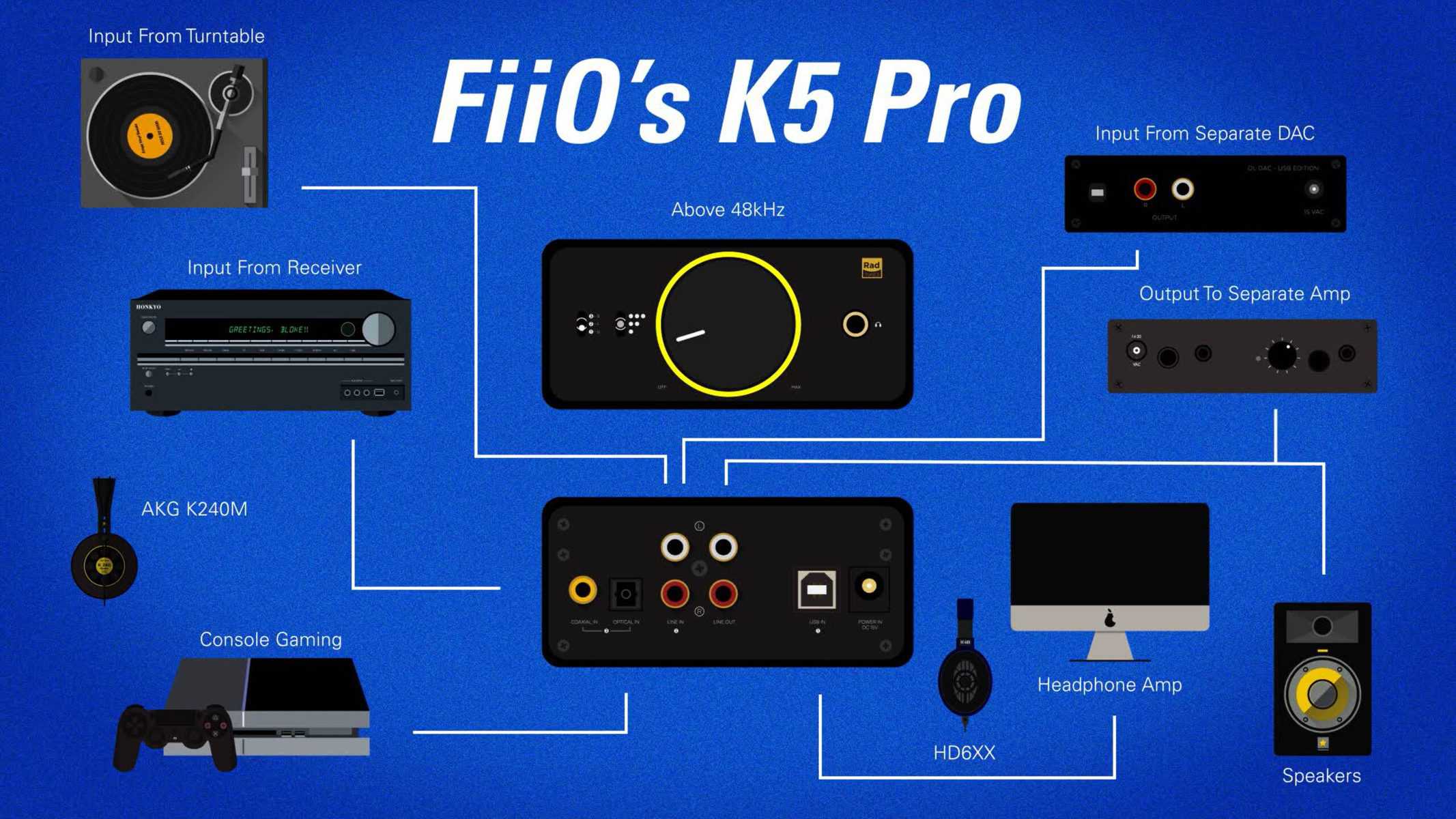 The FiiO K5 Pro is a great example of an incredibly versatile Amp/DAC combo.

If you’re a newcomer to the hobby:

Stick to 24/44, 24/48, or 24/96 if you’re really feeling bold. Anything more than that is essentially useless from a scientific standpoint.

Don’t try and convince yourself that it’s better, because it’s likely just a placebo.

It’s a way for your brain to try and justify spending more money or arriving at a conclusion that is supported by emotions rather than data. Sure, listening to music should always be an experience. I’ve been harping on the importance of it for what seems like an eternity now.

But in passing off opinion as fact, we delve into dangerous territory by making bold and extravagant claims that aren’t backed up by anything.

In my opinion, this is precisely what gave rise to the audiophile. A true audiophile should be passionate about music. That was the original intent. But it’s morphed into something totally different nowadays.

I will leave it at that for now.

If you are interested in a do-all, the G6 or K5 Pro are my 1-2 punch right now. For the shootout:

Well, that’s about it for today my friend! What Is DSD In Audio? I hope I’ve answered your question and given you some food for thought on the matter!

Is DSD important to YOU? I would love to hear your thoughts.

4 shares
DSD vs. PCMWhat Is DSD In Audio?
0 comment 0 FacebookTwitterPinterestEmail