What is a cardioid capsule? | All about microphones!

Lately, I’ve been really trying to get down to the brass tacks of microphones. I understand how they work, but I want to also know what makes them function and why. I would also like to share this with you! So what is a cardioid capsule? Let’s find out!

Before we get started though, grab a snack, sit back and relax because..

I’ve always used mics, and have been able to use some terminology to describe basic concepts, but never really understood how the components of a microphone came together to deliver sound to my ears.

We’ve all heard of different terms such as the “diaphragm”, the “capsule”, grill, etc., and have (hopefully) been told never to damage the fragile diaphragm inside of the mic. This is why pop filters and windscreens are used. The inside of a condenser mic is so fragile that even the smallest amount of debris, spit, or dirt can damage your little buddy and render him useless. We don’t want that!! So with that in mind, let’s find out how all of these things come together to create sound.

How a microphone works

A microphone is a type of transducer, which is a device that converts energy from one form to another.

Microphones also convert energy in the form of sound waves into electrical energy, aka the audio signal that results. 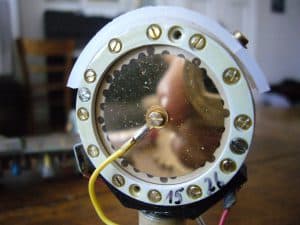 All microphones have a diaphragm, which is a thin piece of material that vibrates when sound waves hit it. The diaphragm is commonly made of paper, plastic, or aluminum. In many condenser microphones, you can actually see it through the mic’s grill piece. It’s that round shiny thing inside the mic. That’s what we never want to damage. When it vibrates, it causes other components of the mic to vibrate as well; These are converted into an electrical current and eventually become the audio signal that we hear.

As I said before, some people choose not to use a pop-filter. I use one every time because I’d rather play it safe. Not only does it protect your mic, but it also boosts sound quality as well. A pop-filter minimizes “plosives”, those consonants that our mouths make in the form of the sounds “ss” and “pp”.

Before the signal is usable, it has to be amplified in some way. Mics generate a very weak signal on their own, so the sound needs to be boosted.

You may have heard of the term “48v phantom power”. This is what a condenser microphone generally needs to boost the sound to line level, which is the standard signal strength used with different types of audio equipment.

A dynamic mic uses a magnet and a coil of wire to generate the audio signal. The magnet is moved, thus creating an electrical current generated within the wire.

The diaphragm is attached to the coil. When the sound waves (aka your rap lyrics) hit the diaphragm, it vibrates, causing the coil to move backward and forwards past the magnet.

This creates the current in the coil, which is then channeled from the mic via wire, to a source such as an amp or loudspeaker.

Check out my post on Condenser mic vs. Dynamic mic to learn about some good uses of each!

A condenser mic uses a capacitor to convert energy into an electrical signal.

As mentioned above, a condenser needs power from another source to amplify it. The 48v phantom power from an audio interface is the most common option nowadays. You may also opt to purchase a separate preamp. Preamp vs. Interface

In a condenser, there are 2 plates; one is the diaphragm that we talked about (made of thin material), and the other is the backplate. Both of these plates together form the capacitor.

The distance between the two plates is changed when sound waves hit the diaphragm, thus changing the capacitance and creating an electrical charge.

The electrical charge or voltage either comes from phantom power (as discussed) or a battery within the mic.

All mics have a specific directional or way they receive sound. Some even have multiple patterns built-in, giving you added flexibility and versatility. There are 3 main kinds:

This is the most common type and forms a heart shape. It is meant to receive sound from only the front and to a lesser extent the sides.

This receives sounds from all sides and is less commonly used. You may utilize this for ambient sound.

Also called figure 8, this one receives sound from the front and back, and to a small degree the sides. You may want to use this pattern for an interview of some sort, with a person on each side of the mic.

So what exactly is the cardioid capsule?

It’s just two things we talked about previously that make up the internal parts of the mic:

The wires carry the signal to your audio interface, which then gets carried across your computer’s motherboard to be processed.

Learn more about how your computer processes this information in my article on Bit depth vs. sample rate!

Well, that’s about it for today my friend! I hope I’ve answered your question about What is a cardioid capsule and also given you some valuable information in this article.

Questions? Comments? Request for Recommendations? Did I miss the mark on something? Let me know in the comments below or contact me!! I would love to hear from you…