Today I’m going to be bringing you a relatively short post on TRS vs. TS cables, and what each is generally used for in the studio. We’ll also briefly cover XLR and TRRS as well. So grab a snack, sit back and relax because…

In building your home studio, you will come across a variety of different cables. Way back when RCA (unbalanced) were the most common ones. Remember those annoying Red, White, and Yellow wires that seemingly always ended up collecting dust somewhere in a shoe-box? I do! Still to this day I find them in the strangest places, and just have to laugh.

They do function well in a lot of instances though, so don’t knock ’em! For example, a lot of Amps & DACs have RCA Analog Outs and/or and Ins that really do come in handy in a wide variety of situations. I can output from a separate DAC into a Headphone Amp using RCA to RCA, I can output from a DAC  into a separate Amp like the JDS Labs Objective 2 using an RCA to mini cable, I can output RCA to XLR if I want to use the Amp as a preamp into some separate monitors, etc. The possibilities are endless.

TRS and TS are used in a lot of things that may or may not show up in your studio as well. Things like:

You may have bought a pair before, not really thinking twice about the difference. I’m the same way actually. When I purchased my JBL LSR 305’s, I paired them with TRS cables because my research indicated I needed “balanced.” I didn’t really know what that entailed back then, but today I will make it very clear!

Roll up your sleeves.

First up is TRS…

TRS stands for “Tip, Ring, Sleeve” and can be used as a mono balanced, or stereo unbalanced signal. An example of a mono, balanced jack is the line output (Right and Left) from the Focusrite Scarlett 2i2 (An audio interface). What does an audio interface do?

So to achieve a fully balanced sound with studio monitors, you would need 2 TRS to XLR balanced cables running from the back of the 2i2, into each monitor.

An example of a stereo unbalanced signal could be when you plug your headphones into a headphone jack, utilizing either the 3.5mm termination, or screwing on a 1/4″ adapter and plugging it into an amp that requires such. 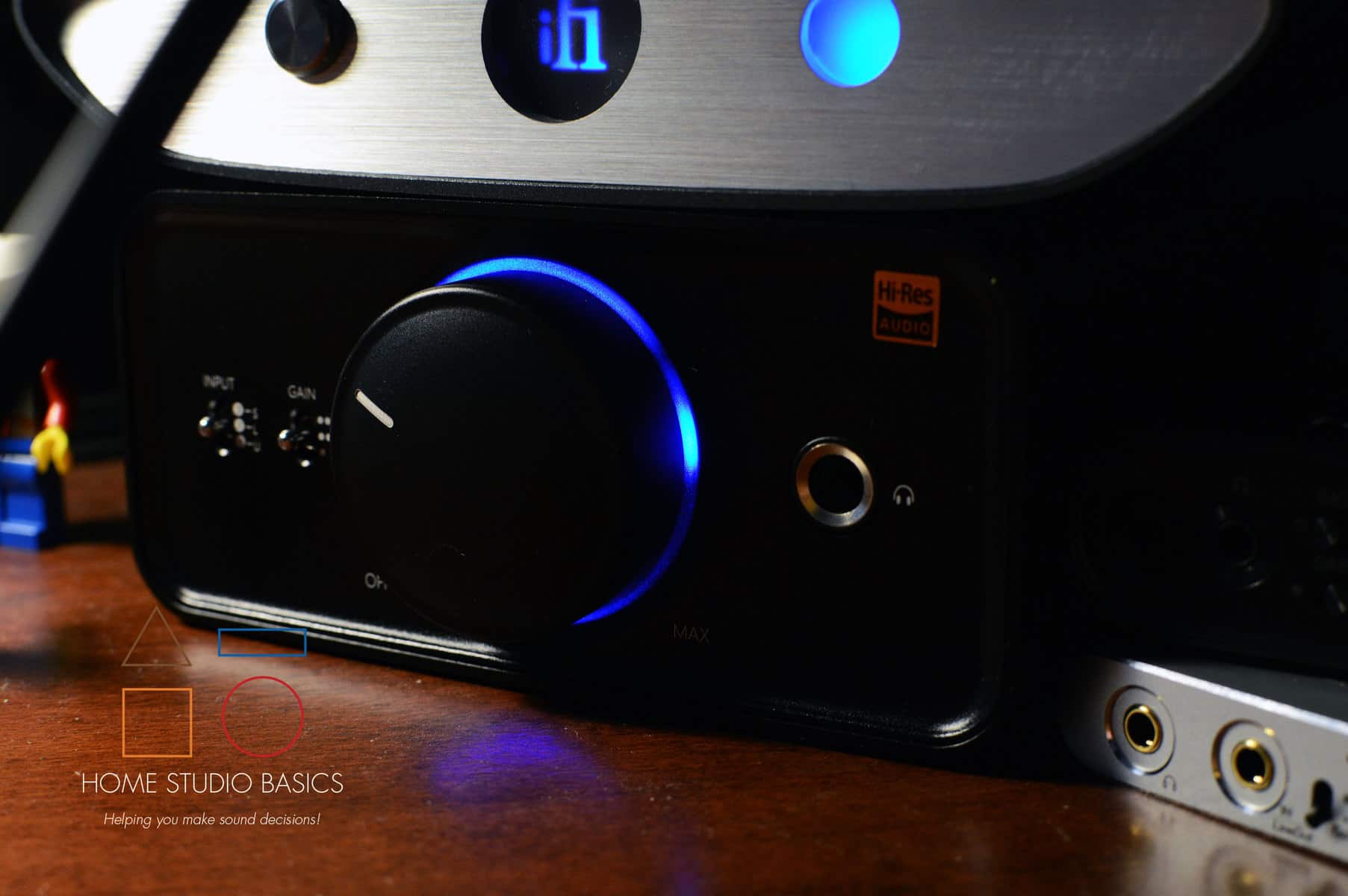 TRS cables are great for studio monitors because they have very low noise.

Because they are balanced, they utilize 2 signals: one positive and one negative. As the sound travels down the wire, the negative polarity is flipped once it arrives at the input (headphones, speakers, etc.) thus canceling out the noise (This is a rudimentary way of explaining Reverse Polarity, but the concept remains). It’s why using balanced TRS is the preferred option for these setups.

The last thing you want to hear when your speakers are idle is a hum or a faint, distant sound which is extremely hard to get rid of. Good cables go a long way! (Just don’t spend an arm and a leg, we’re not about snake oil here). Lol.

Even so, you’ll generally want to find something that isn’t cheap as dirt. A lot of the time, people end up buying the cheapest junk out there when really, the somewhat more expensive (and well-researched option) could make all the difference in the world in receiving a good sound vs. a crappy one.

Again, I’m not talking about $1000 + cables. That sh** is for the birds. I’m talking about not being a bum. For instance, I invested in a good set of TRS to XLR’s and they are still going strong in my studio. I’ve tested out Optical cables running into the thousands, and other more ritzy type RCA to mini cables, and even if there is a sound difference, it might not even be audible (aka you probably won’t give a crap anyway). So chill the f out, take my advice, and don’t blow all of your hard-earned cash okay? 😛

The same goes for microphones. For instance, the Scarlett 2i2 has combo inputs, meaning you can plug a TRS cable OR an XLR cable into the front of it. If you went the TRS route, a quality cable can make the difference in how your recording comes out when you play it back. The same goes for XLR cables actually.

You will also notice that a lot of entry to mid-level audiophile headphones come with 1/4″ TRS adapters, which conveniently plug into your interface or mixer.

Some people say that in dealing with under 6 feet of cable, the differences in sound between a TS and TRS cable is almost indistinguishable. You be the judge.

Again, the tip is the signal, the ring is the negative signal, (this is what blocks out the noise, i.e. the reverse polarity that we talked about), and the sleeve is the shielding of the cable (or the ground), which is also present in the more simplified TS version.

What’s also interesting to note is that the 3 pronged XLR cable functions in the exact same way as a TRS cable when it’s used. It’s just that the implementation/design is a bit different.

TS cables are generally used for mono, unbalanced signals like the sound from an electric guitar or another instrument such as a keyboard. They are also quite a bit longer (between 10-20 ft.), because of the fact that musicians on stage move around a lot. They act as noise “gatherers” if you will, for cables that are pretty long.

The reason that guitarists use TS is that:

A TS cable also only has 2 separate wires running inside. One wire carries the audio, the other carries the ground. Being that there is only one copy of the audio signal, it then becomes susceptible to picking up noise as the signal travels down the wire. 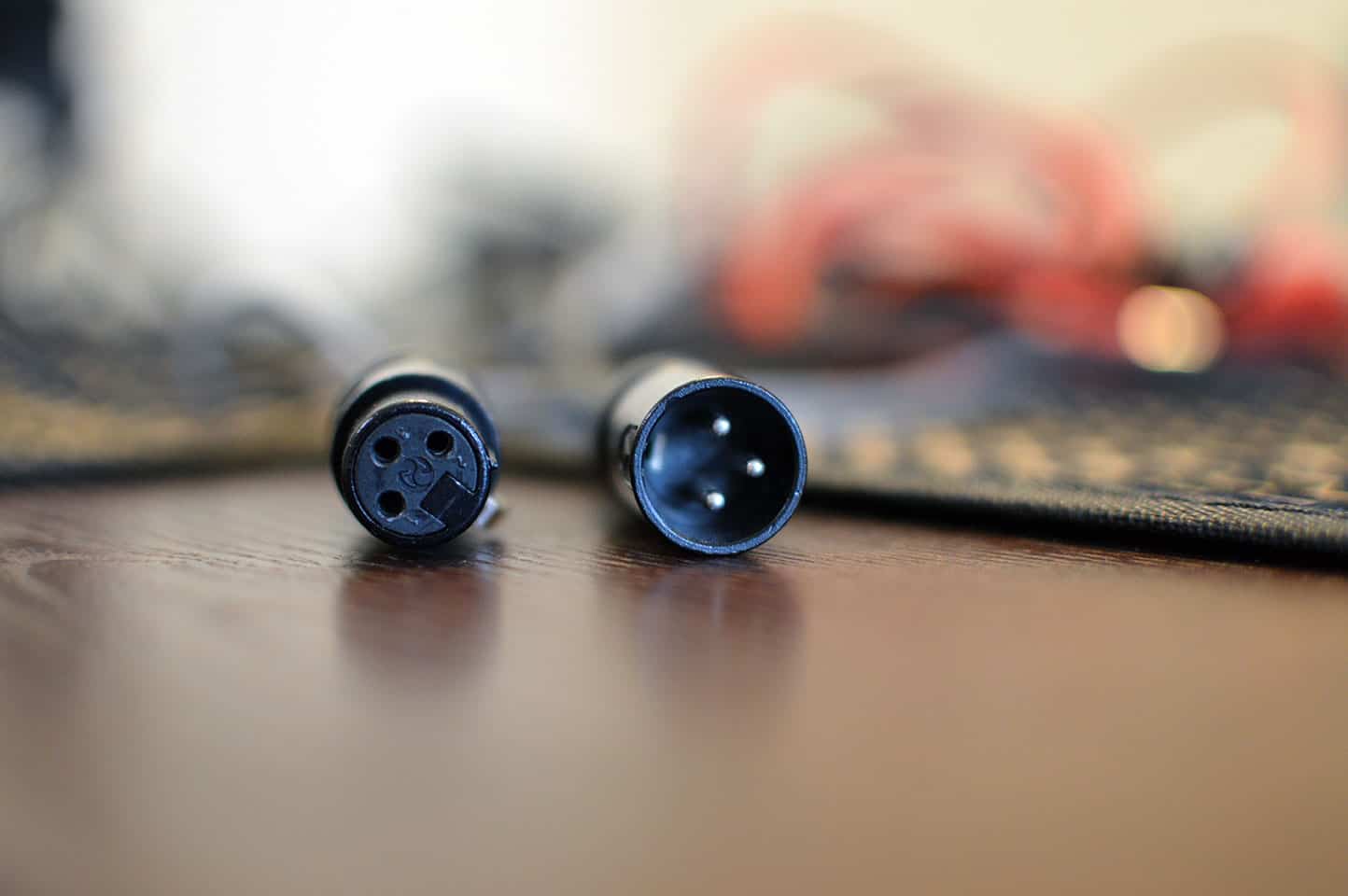 A staple in the studio.

It would be unfair to leave poor XLR out of the equation since he’s also very important in the studio and something that I personally utilize quite a bit. What is XLR? These guys can run up to 100 ft. without noise and are generally used with a lot of entry to mid-level condenser microphones like my beloved Samson C01.

As mentioned above, XLR is also used very frequently with Near-field Studio Monitors that have a line-level signal.

The cool thing about an XLR cable is that it has 3 signals as well.

If you’re singing or rapping into a mic, your voice is split into two wires. As it’s running down the wires, one wires’ polarity is suddenly flipped, and the 2 signals become out of phase with each other. As the sound continues to travel, it eventually reaches the other side of the wire. When it gets there, the polarity is flipped a second time, and the signals become in sync again. After this, they are processed by whatever gear you are using (An interface or mixer). Your computer actually does this in the form of 1’s and 0’s or an analog to digital conversion. In the opposite (a digital to analog conversion), the sound is processed so that YOU can understand. That’s a bit of a separate animal, but the concept is the same.

Related: Beginners Guide: What is a USB DAC? & Everything You Should Know!

By now you may be asking…

Why did the Polarity flip?

Why are you asking so many questions, homie?

Personally, though, my mind is blown. I really do think that’s the coolest thing ever (not the Futurama reference, the concept of Reverse Polarity). I hope you do too!

Check out my homie Pete Johns going into the differences between TRS, TS, and even TRRS (4 poled)! Whoa Nelly!

Well, my friend, that’s about it for today. I really hope you’ve learned a lot in this TRS vs. TS article, and came away with a better idea of which to use in different situations.

What kinds of cables are you looking for in your studio? Let me know!

0 shares
TRS vs. TRRSTRS vs. TSTS vs. TRS vs. TRRS
4 comments
0
FacebookTwitterPinterestEmail

Keep up the hard work G. You will get there. These pages you have are very useful.

Thanks man. Your support really does mean a lot in these tough times.

For anyone reading this, here is my response to him from Instagram in spanish and then english

Hey man! Thank you very much! Don’t worry 🙂 I use the translator all the time. I really need to re-learn Spanish HAHA! Yes, I think you can use something like this: https://www.amazon.com/Cable-Matters-Dual-Unbalanced-Interconnect/dp/B07SHWYDVQ However, the signal will not be balanced. When I had the 305s, I used them with a Scarlett 2i2 and balanced TRS to XLR. However, I have never powered unbalanced studio monitors. For me, XLR or TRS is fine. I wouldn’t get too caught up in trying to decide on one or the other. I will only recommend XLR to you 🙂 Keep me posted with more questions. Glad to help!