OneOdio A70 Review – These Are REALLY Bad

The A70 is a dirt cheap headphone, but does it SOUND dirt cheap? 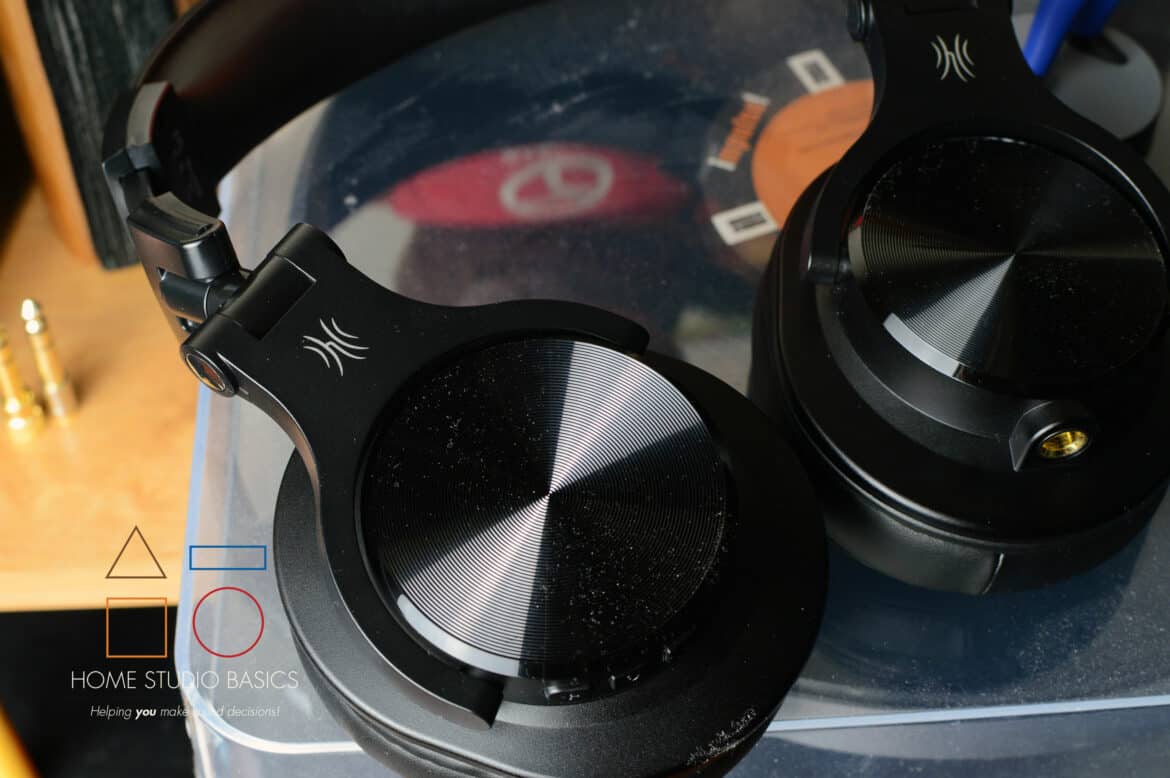 Shoutout to OneOdio for reaching out and sending the A70! I do not have to return these and received them free of charge. 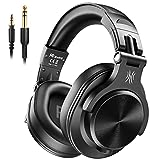 Last time we reviewed the OneOdio A71, but how does the A70 stack up? Is it any different?

Well, yes and no.

Let’s start with the build quality. This matte black headphone is a rather cheap-feeling pair of headphones and I suppose its price somewhat reflects that.

It’s pretty much the exact same build as the A71.

There’s a sliver of metal for the headband adjustments, but aside from that, we have an all-plastic profile that feels about as heavy as a K240.

The adjustments make a clicking sound (as you can match both sides) and the look and design remind me of a smaller M50x but not nearly as robust.

There are dual terminations into the earcups, but you’ll only be using one side and have the option of utilizing the 1/4″ on the left or the 3.5mm on the right.

The earcups rotate around 90 degrees and also fold up rather compactly, but they don’t fold quite as neatly as my beloved MDR V6: the stitched faux leather headband padding seems soft and supple, and the earcups do as well, though I can see these peeling and cracking over time as many others have in the past.

There’s also a USB Type-C charging port on the back of the left cup.

More on that later.

Rounding out the package are an included carry bag, some literature, Bluetooth instructions, and 2 different cables: Surprisingly, these are rather comfortable and do improve on headphones of the past such as the 40x and 50x.

I’d feel much better wearing these over long sessions than I do those.

I complained a bit about the A70’s lightweight profile in the build section, but it turns out to be one of its strongest assets here as I don’t really feel it digging into any part of my head.

Just be aware that it’s going to feel pretty cheap in your hands.

The clamping force is snug but not too tight or loose, and there’s just enough room for my ears inside the cups which is a nice improvement over the MDR-7506 and V6’s somewhat Supra-Aural feel.

I felt like those headphones were a cross between around-ear and on-ear and tended to rest on your ears more often than not. Well, this is where things turn a bit south.

First off, the bass is noticeably bloated and boost-y in the mid area around 100-200Hz or thereabouts.

This is a spot in the frequency response that most companies tend to overemphasize, and unfortunately, the A70 is just another that falls victim to this issue.

the higher you turn the volume up the more bloomy and bad it presents itself, which was an issue when I tried to rock out with Fabolous’ “Into You” – one of my favorite guilty pleasures.

The same issues manifest on Little Brother’s “Slow It Down”, as the low-end attempts to flex over the other frequencies and most certainly takes away from the overall vibe of the song.

It kind of sounds like there’s a layer of fuzz over everything, and it most certainly ruins what is one of my favorite hip-hop tracks. Because of this, the mid-range will sound pushed back and ends up playing second fiddle.

Not only are instruments and voices distant, but they have no life of their own, no character, and no unique tone.

the Timbre here isn’t good and just plays like a bunch of sounds vomiting through a headphone driver.

Furthermore, imaging and instrument separation is fairly poor as well as stuff ends up running together more often than not.

Making distinctions between sounds and subtleties is nearly impossible and just ends up leaving me disappointed and not wanting to listen to music.

It’s even worse if you’re listening to a track such as Toonorth’s “Wish You Would Call”, one in which he really went overboard mixing the low end.

It’s a good track that sounds terrible through the A70.

This is a prime reason why it’s important to mix on but also listen with neutral headphones as they won’t overly accentuate an already boosted mixdown.

I wouldn’t use the A70 for mixing if someone paid me. That’s how bad it is.

In no way does the A70 represent an honest portrayal of music and anyone who’s mixed a track can instantly recognize that within seconds of firing up a song.

Now it may sound like I’m really dumping on these headphones and I am.

When you’ve heard over 120, many of them being of the high-end audiophile variety, it becomes way easier to instantly recognize the poor sound and that’s what we have here. That said, the treble isn’t all that bad but lacks the sparkle, zip, and zest needed to liven the sound signature up and make it sound in any way worthwhile.

I appreciate the fact that it’s not Sibilant or essy, but there’s no character here.

It sounds dull and repressed like a dog who ends up in a cone.

most of this has to do with the boosted low end, but it’s really bad.

On Masego’s “Flight 99”, you can actually hear fuzz when the bass hits, and it’s just cringe-inducing.

Is this an issue with the track itself and how it was mixed?

Perhaps (it depends on the track), but the A70 is not tuned well and it becomes painfully obvious when you’re listening.

No, because I don’t hear that fuzz with good headphones that portray the bass correctly.

Now, some may say the highs are actually peaky and overly emphasized.

The problem with this is that you can’t really make that distinction because the bass is so out of control and boomy that it kind of unnecessarily takes precedence over everything else.

In other words, the bass almost inadvertently masks the A70’s treble deficiencies – an alarming thought. Aside from its BT functionality, it’s the exact same headphone as the A71.

Build, sound, comfort, everything. It’s as close as close gets to being the A71’s identical twin.

So the A70’s sound is sub-par, but the other issue is that they’ll fall off your head in no time as you’re laying down on a bench for dumbbell chest presses.

As soon as I sat back into position, the headphones fell to the floor and I felt like a complete doofus.

I’ve owned headphones that never move when I’m in the gym, so to say this was a complete disappointment would be an understatement.

To make this embarrassment possible, there are 3 buttons on the back of the right cup.

Hold the middle to power on/play/pause, and cycle songs with the + and – buttons which also obviously raise and lower the volume. There is also a status LED and mic.

Lastly, charge the headphones via the USB Type-C jack on the left cup.

The other thing is that they don’t isolate that well because the seal isn’t quite tight enough.

I suppose that’s good from a comfort standpoint but bad in terms of isolation, so make of it what you will.

Put simply, I can still hear mostly everything going on outside of these headphones including birds, my phone going off, the fan, etc.

At 32 Ohm impedance and 110dB Sensitivity, these aren’t hard to drive and will sound loud enough out of virtually any smartphone or device you may have.

No amplification is needed. Unfortunately, I can’t recommend these and won’t.

They are marketed as Wireless DJ headphones but I wouldn’t use them for that or anything else: easy listening, mixing/mastering, etc.

If OneOdio was going for a basshead’s headphone for Hip-hop/Rap, I don’t think they hit the mark.

If they were going for a mixing/mastering headphone,

I don’t think they hit the mark.

If they were going for DJ headphones,

I don’t think they hit the mark.

If I were just grading the overall package and what’s in the box,

I’d say they succeeded given the dirt-cheap price.

The problem is that the sound is dirt cheap, and that’s not what we’re after, friends.

NEXT: THE 16 BEST HEADPHONES FOR HIP-HOP

For a much better Bluetooth headphone, definitely go with the M50XBT.

SEE THEM FOR YOURSELF ON AMAZON!

For all of my top mixing options,

THE BEST HEADPHONES FOR MIXING AND MASTERING

Well that’s about it for today my friend! enjoyed this OneOdio A70 Review and came away with some valuable insight.

Do YOU think the A70 is a good value? Be sure to let me know!! Until next time… 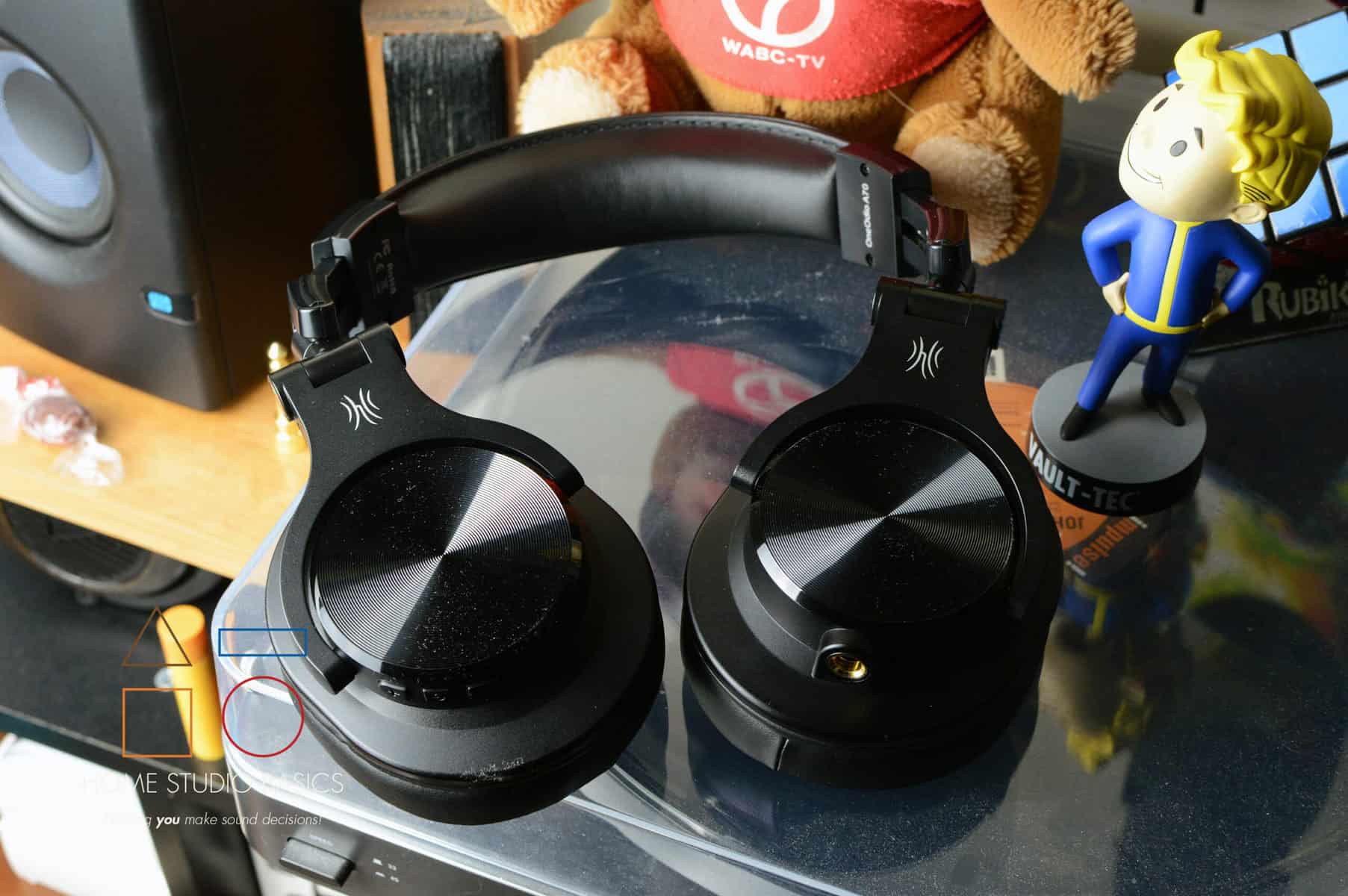 It’s so frustrated to read your review on the web full of ads every few lines. Good luck