What is Timbre? | FIND OUT HERE!

This is part of a FAQ series! Please share and comment if you found any of these articles helpful 🙂

What is Timbre? That’s a great question that gets glossed over quite a bit in the music world. I came across the term listening to a review of the Sennheiser HD 600’s, and thought it would make an interesting article! This will be a relatively short article, but before we get started…

Grab a snack, sit back and relax because… 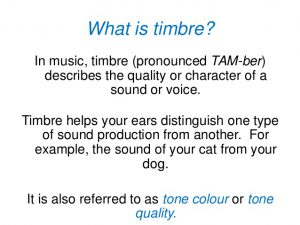 Put simply, Timbre is a general term for the distinguishable characteristics of a particular tone. It allows your ear to discern sounds that have the same pitch and loudness. Called tone color or tone quality, it’s used to differentiate musical instruments, string instruments, wind instruments, and percussion instruments. Think of it as the difference between a guitar and piano playing the same note at the same volume. It’s determined primarily by three things:

Defined as “periodic changes in the pitch of a tone”. Vibrato is considered pleasing to the ear in music, as long as it’s not overdone. It can be used for expression and adds richness to the voice. Generally speaking, the more clarity there is to a sound, the more easily our ears can differentiate pitch and differences in timbre.

A good example is when you pluck a guitar string. The resulting sound looks like a peak on a graph/illustration, followed by a long and gradual minimizing of the waveform (if you will). Peak amplitude and then a long and gradual decay.

Amplitude is the height or volume of a sound wave.

This is basically how rich the sound or note is when played by a musical instrument. So, the fundamental frequency (the overall character of a sound, or the note we first identify with) + The harmonics (the other frequencies in the wave) = Timbre. So timbre stripped down is simply, the unique sound of an instrument.

Harmonic content is also the number and relative intensity of the upper harmonics present in the sound.

In general, the higher the quality of headphones, the more likely you will be able to really hear the unique sounds that Timbre provides. As we’ve learned, each note from a musical instrument is a complex tone containing more than one frequency. With headphones, this concept is most effectively demonstrated by those of a higher caliber, such as the Sennheiser HD 600.

Check out my Sennheiser HD 600 Review!

In truth, the 600 has been said to lack some air and harmonic content in the treble range, contributing to the whole “veiled” theory. What is the Sennheiser veil? A lot of people call it a myth, because of the fact that a lot of earlier model headphones placed such a heavy emphasis on the treble, that they became overly bright and harsh. The HD 600 is by contrast very smooth and detailed.

I hope that answered your question on What is Timbre? I know this wasn’t one of my typically longer posts, but the question rarely gets asked and I wanted to clarify it for myself and for you!

Check out the videos!

Questions? Comments? Requests? Did I leave something out? Let me know down below or Contact me! I would love to hear from you…

Great Explanation Stu, Ive heard the term many times and never really knew what it meant but I do now.

Yeah man! Timbre is super important and what separates a planar magnetic from your typical dynamic driver headphone in my opinion. Everything just sounds more true to life, as if you’re hearing the way it might sound in reality vs. through a device. 🙂