Recent
Focal Utopia Review: Best In The World?
Burson Playmate 2 Review – Worth An Investment?
HIFIMAN Arya Review – Is It A Waste...
Sennheiser HD6XX Review – Still #1 In Headphones?
HiFiMan HE4XX vs. 400i vs. 400S vs. Sundara
iFi Zen CAN Signature HFM Review
HIFIMAN HE400se Review – The End Of Hi-Fi?
The Lie That’s Destroying Audio
iFi Go Blu Review – A Standard For...
What is Soundstage? [Detailed Explanation]
Home The Best The Best Headphones for Hip-Hop [In Depth Guide]
The Best

The Best Headphones for Hip-Hop [In Depth Guide] 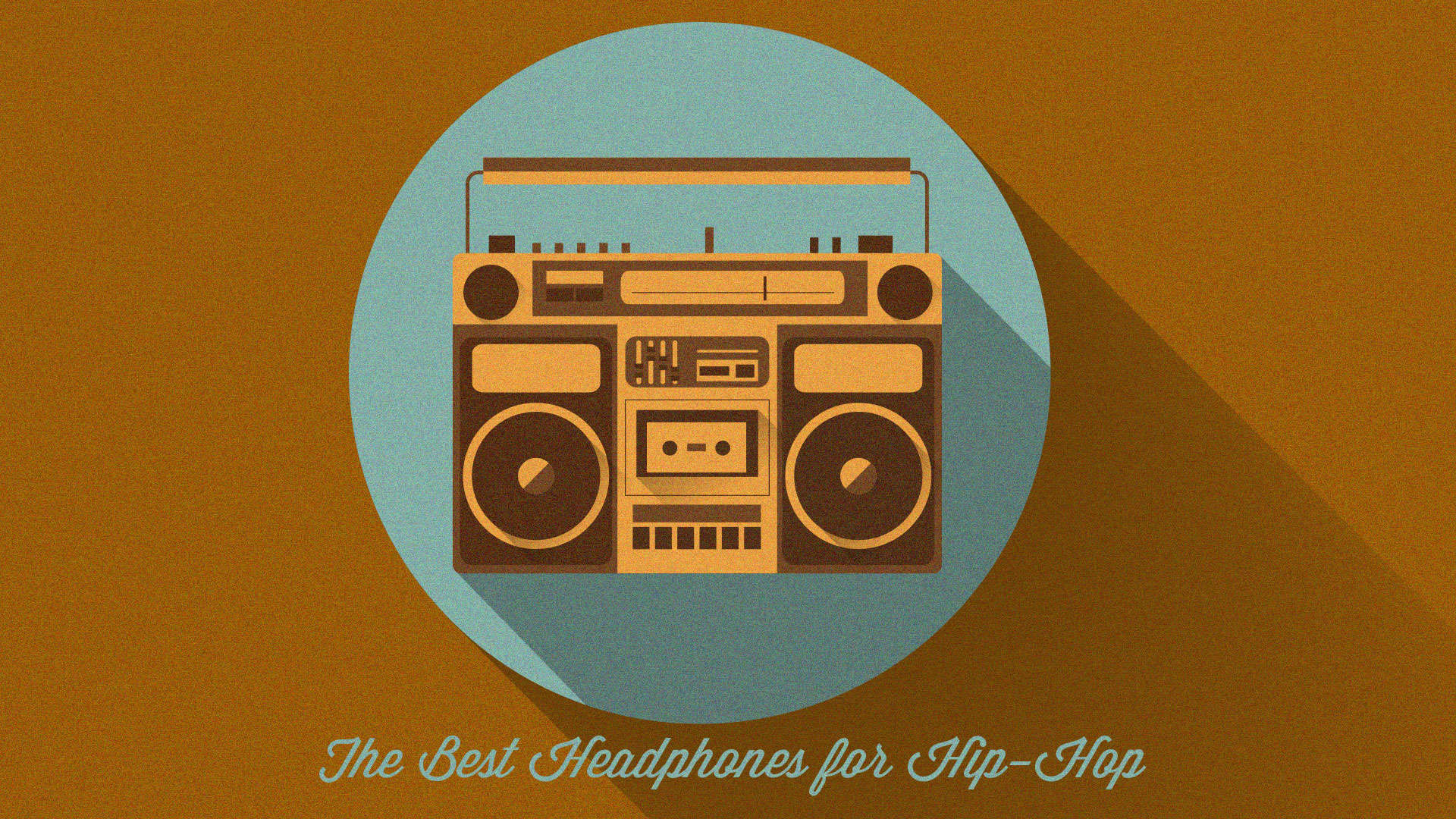 Kalimera friend and Welcome aboard!!

This is part 6 in a 7 part series on Genre, which takes a nostalgic look at some of my personal experiences with various types of music, games, and pop culture over the years. Check out the others if you would like! Suggestions for how to improve? Contact me or leave a comment below!

Before we get into the best headphones for Hip-Hop, grab a snack, sit back and relax because..

This is my boom box. There are many like it, but this one is mine.

Before we get started, just know that I’m bound to get long-winded in this one. So grab a couple of snacks and a drink, because depending on how much you enjoy hip-hop music and the culture as a whole, you may enjoy my ramblings and nostalgia! If not, you can just skip it. 😀

I’ve always been a fan of Hip-Hop music, but my tastes have definitely changed since I was a lad. I was first introduced to it in middle school. It’s interesting in that I never even knew what Hip-Hop was from a baby up until about 5th grade. I was never exposed to it, in part because I came from a Rock n’ Roll household. Learn more: The best headphones for Rock music.

It wasn’t until about 6th grade did I start listening to it, and for the most part, the material was 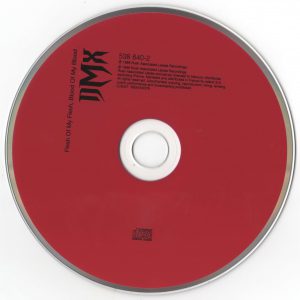 Flesh of my flesh, blood of my blood.

vulgar to say the least. My first real experience with Rap music was DMX’s 1998 album Flesh of my flesh, blood of my blood. In fact, to this day I have inadvertently memorized pretty much the entire album. As a man of God, I’m not really proud of that, but it is what it is. I was young and naive and thought that the lyrics were cool. It’s amazing that our minds can process stuff like that and keep it stored for a lifetime!

It’s also encouraging to hear that Earl Simmons (DMX) has indeed found God, and abandoned his former lifestyle (or is trying to). He still has some issues including a drinking problem, but I pray that God is working it out in his life. I feel deep down that he still has a calling, and hope that he does get it together. The most important thing is that he’s striving. The man has been through a hell of a lot in his life, and I can’t even begin to imagine the half of it.

It’s also important to note that despite all of the over the top cursing, vulgarity, and despicable subject matter, there was a track at the very end that acknowledged God in his life. Called “Ready to meet him”, Earl Simmons pours his heart out to God in prayer and then proceeds to deliver a powerful message over a metaphysical and divinely inspired instrumental.

Anyhow, I digress. Much of the Rap I listened to in the early days was very commercialized. I’ll admit it. But here’s the thing: A lot of it is now actually considered good because the current crop of mainstream artists is even worse! It’s scary to think that at one time, Outkast was considered mainstream. Nowadays they’re what people really miss about Hip-Hop.

Most of the music that came from these artists is still pretty good and stacked against what’s out now, it really fares extremely well. There are a few here that I’m a bit embarrassed about, including Sisqo and the “Thong Song.” But a lot of it has stood the test of time, with some instant classics abound. Ja Rule in particular was always a guilty pleasure for me. He emerged at a time when the fusion of Rap and R&B actually sounded quite good.

Some artists I was exposed to:


These are some of the artists and groups that I grew up on. Hip-Hop has changed a lot, and what’s now considered good pales in comparison to even the worst of these artists! You can’t deny that the quality has gone down considerably since then. 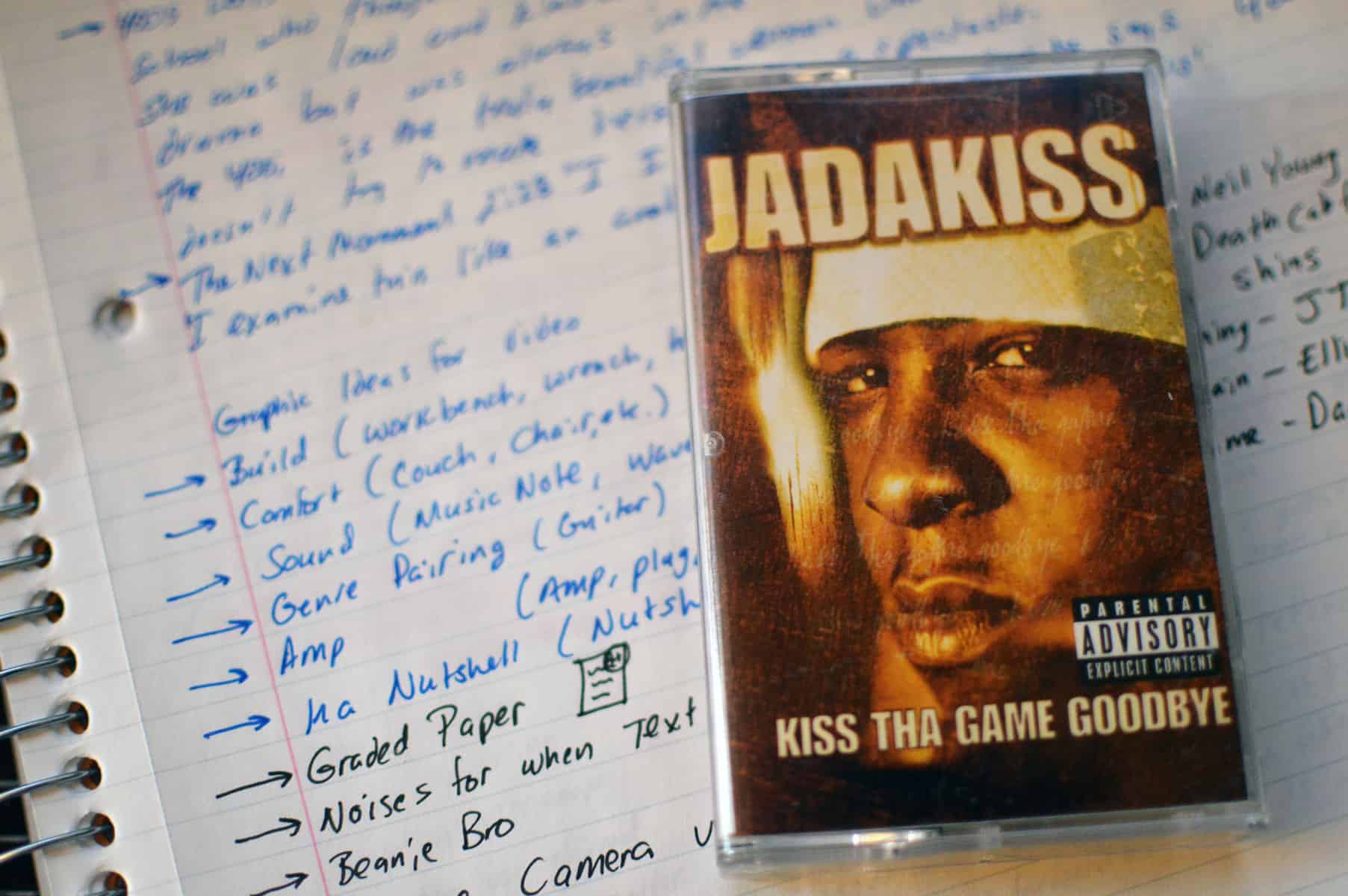 As I got a bit older, I realized how much I was missing out on. True hip-hop has never died, contrary to popular belief. In fact, I was that person at one point. I thought that just because the mainstream seemed to be watering everything down to the point of Rap becoming unrecognizable, that meant that there weren’t true artists out there still thriving and making good music.

There was even a point in time where I was a complete snob about it in some ways. I wanted to discover the most underground artists (or even some old school hip-hop that people hadn’t heard) and tell people about it. But I also wanted people to know that I had the best taste and knew about the best hip-hop. Looking back, it was completely ridiculous, but I have to admit that I was a bit immature about the whole thing in some respects.

That was around my late teens and very early 20’s.

Some of these artists may not be considered underground, but to me, they were since I had never been exposed to them before. For instance, Big L was fairly well known while he was alive, but not as known as say Notorious B.I.G. or a rapper like Big Pun. 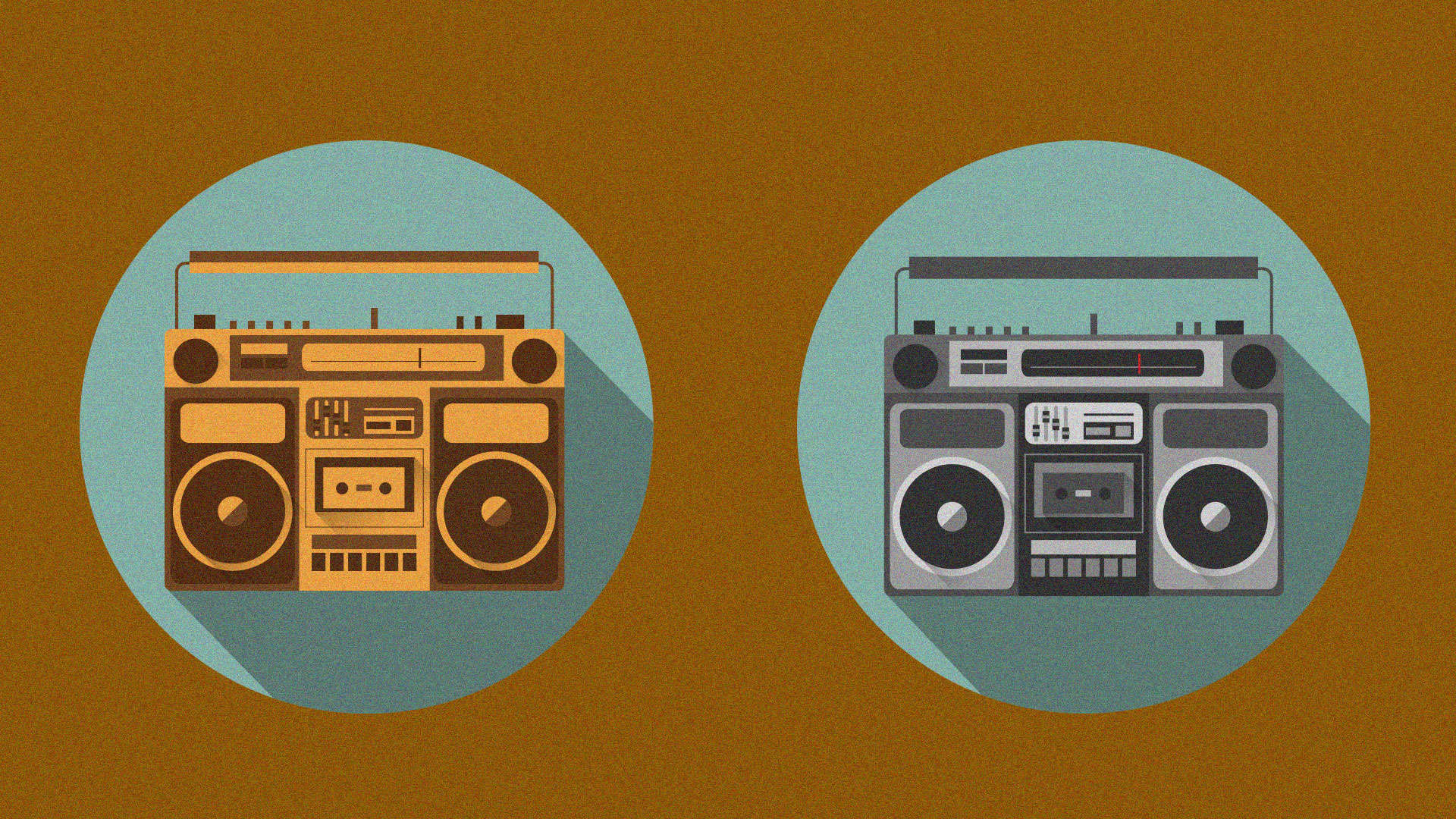 These are my boom boxes. There are many like them, but these ones are mine.

After that phase was over, I gravitated towards just instrumentals. To this day I prefer beats over rhymes, and I think to an extent it’s always been that way. Once I started making my own beats and sampling in 2009, my priorities changed from listening to creating. There came a point when my perception of Hip-Hop got more and more cynical, as I saw artists basically re-hashing the same lines in different ways, with no one truly setting themselves apart (Flying Lotus is one exception on the production side of it). There are only so many ways you can say you’re nice, you know? I do still appreciate and respect artists that put their souls into it, relating life experiences through their music, and talking about real subject matter that people can relate to. But by and large, I think the culture has gotten extremely gimmicky, even on the underground side of things.

Let me know if you like any of these artists. I would love to hear about your own experiences and opinions on Hip-Hop! I don’t live and breathe it like I used to, but I still enjoy it from time to time. 🙂

Regardless of if you’re listening to mainstream or indie/underground hip-hop, the same principles apply when deciding on a good headphone. Let’s get into some of those considerations now!

I will be updating this page frequently as I try out new headphones, add to, and take away from this list. Think of it as a constantly changing guide that will ebb and flow with the times!!

Should you get an Amp or DAC?

For low impedance headphones, the Sensitivity will usually be fairly high, resulting in a can that generally does well with mobile devices. That said, the quality of the song will still largely depend on the source file, as well as your DAC.

For instance, if you have a bad DAC and buy an amp, you’ll only be magnifying bad sound by raising the volume level. This is why it’s important to consider just what you will need and not need.

At the end of the day though, I’m nitpicking a little. Most entry-level closed backs will sound great and the discrepancies in sound quality are somewhat marginal when you’re starting out.

Now let’s get into the meat of it!

A good Hip-Hop headphone will provide all of the following:

Now we can finally discuss some options! 🙂 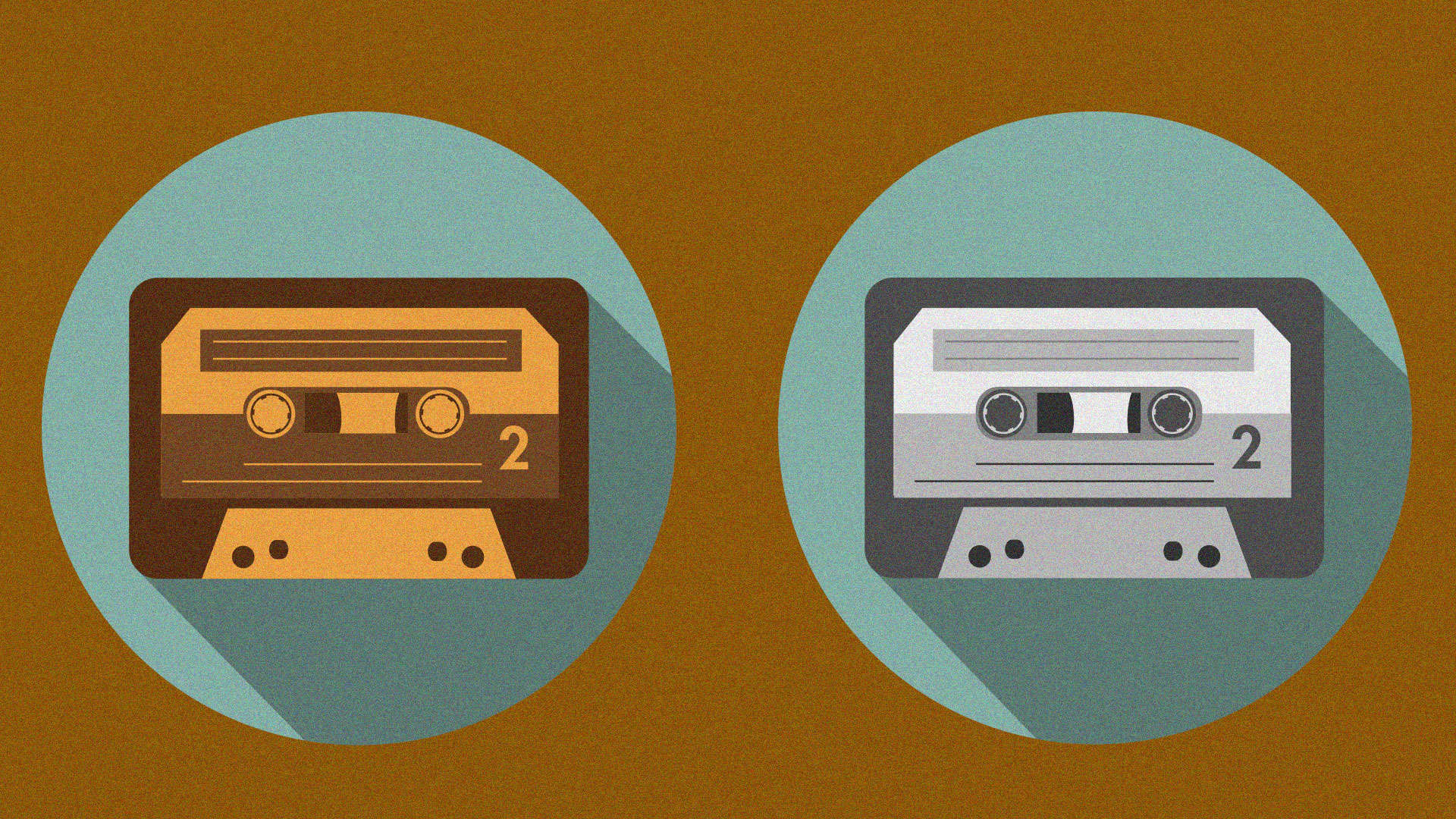 I let my tape rock ’til my tape popped. 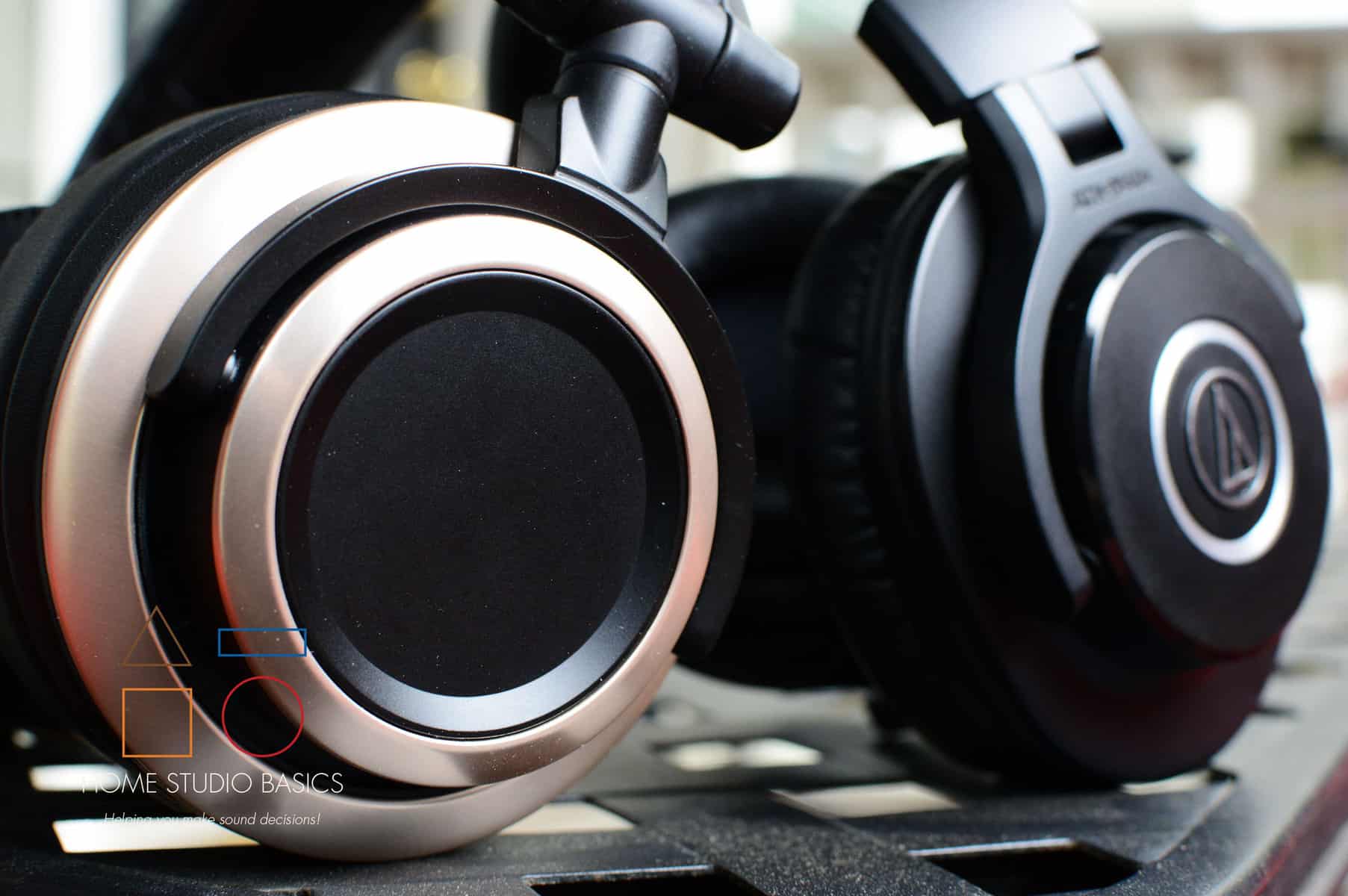 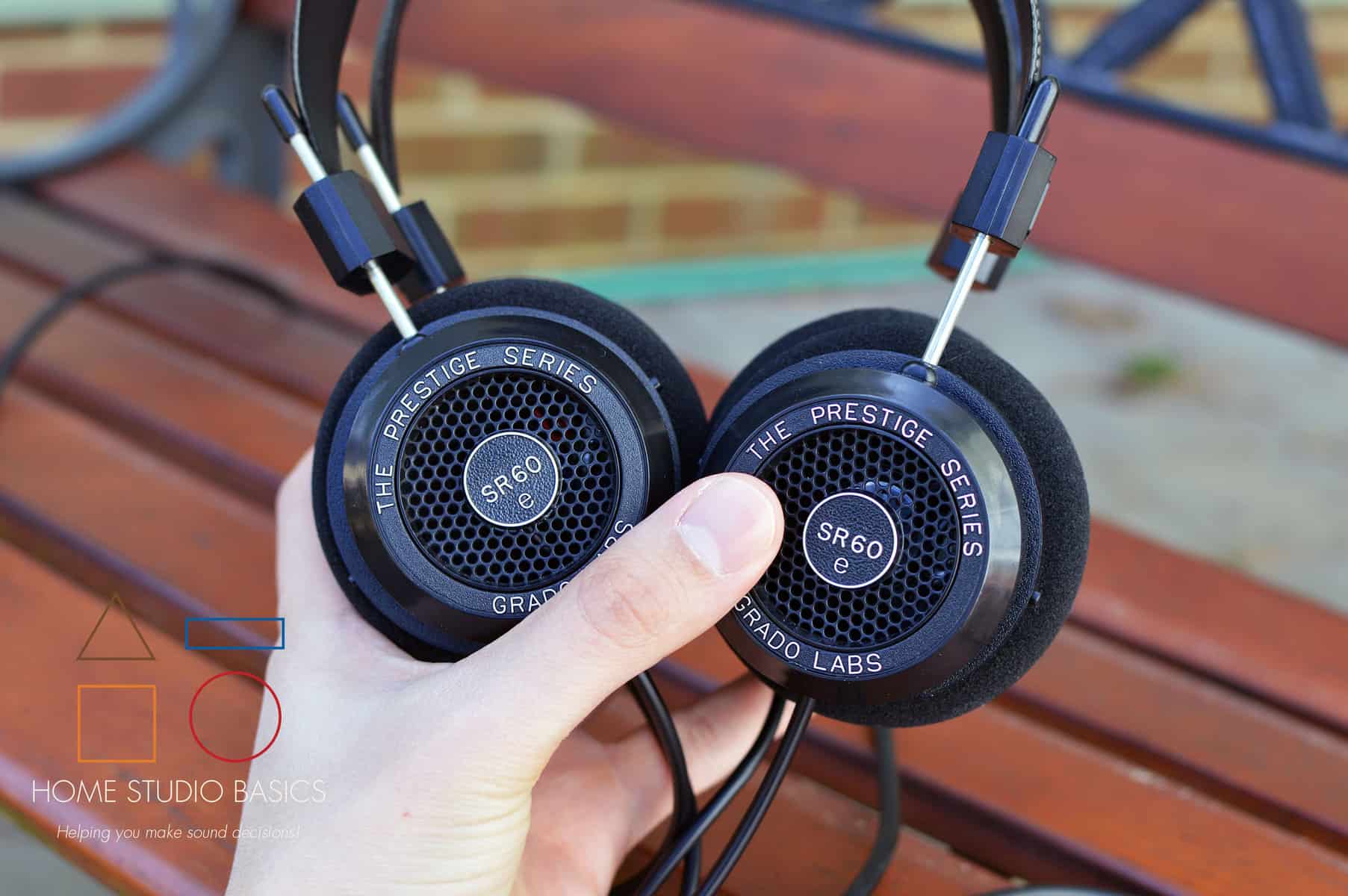 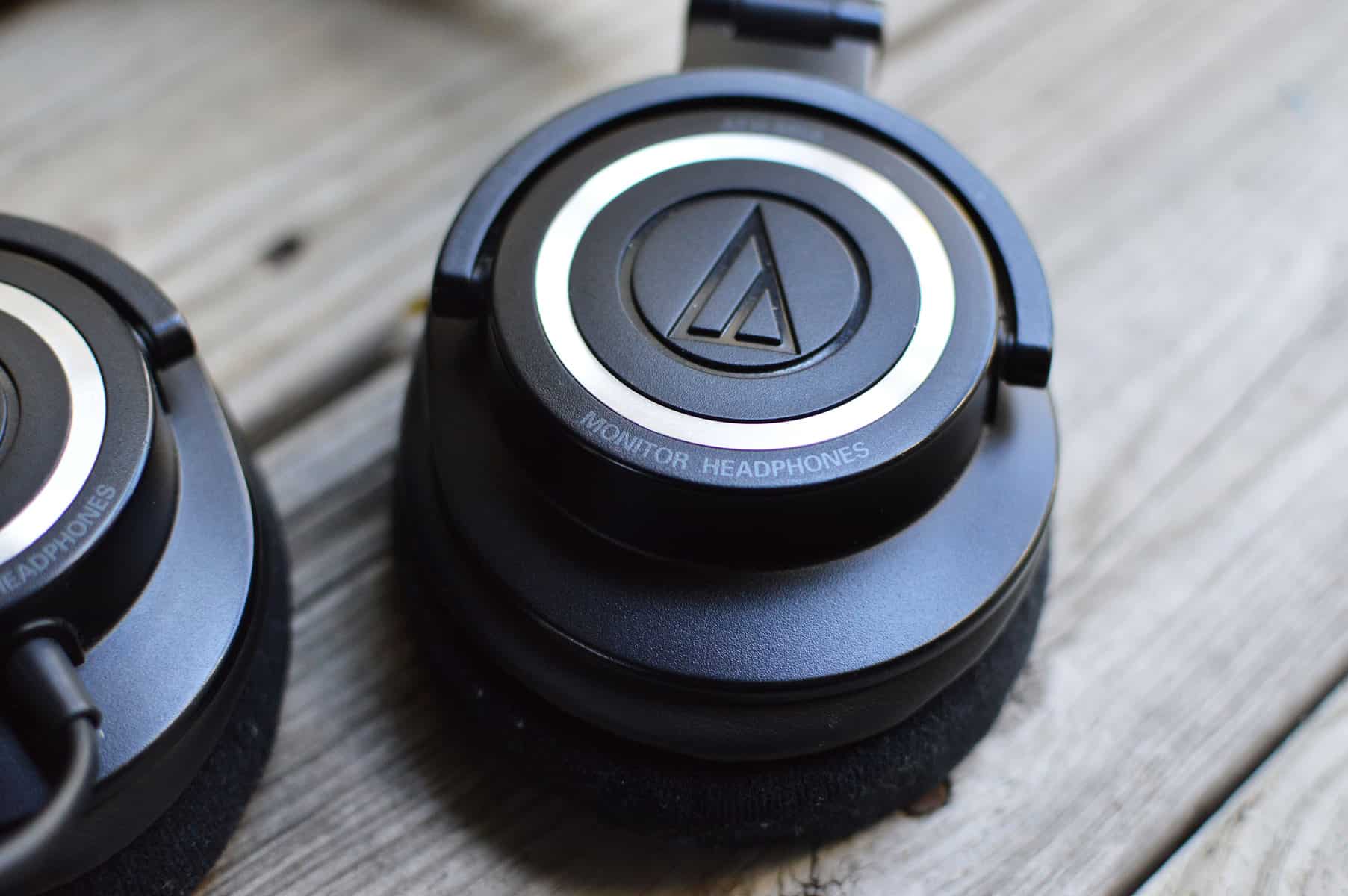 Simply put: This is the best sounding around-ear, sealed, headphone I’ve heard to date. Tonal balance is spot on but for a very slight emphasis 5-10kHz. Bass is tight, well balanced and does not bleed into the mids. Transition to mids is seamless and excellent. Midrange is excellently balanced; vocals and overtones are very well proportioned giving voices just the right sense of presence and ease simultaneously. Treble is terrifically proportioned as well; cymbals and snares sound very natural. Tyll Herstens, Inner Fidelity 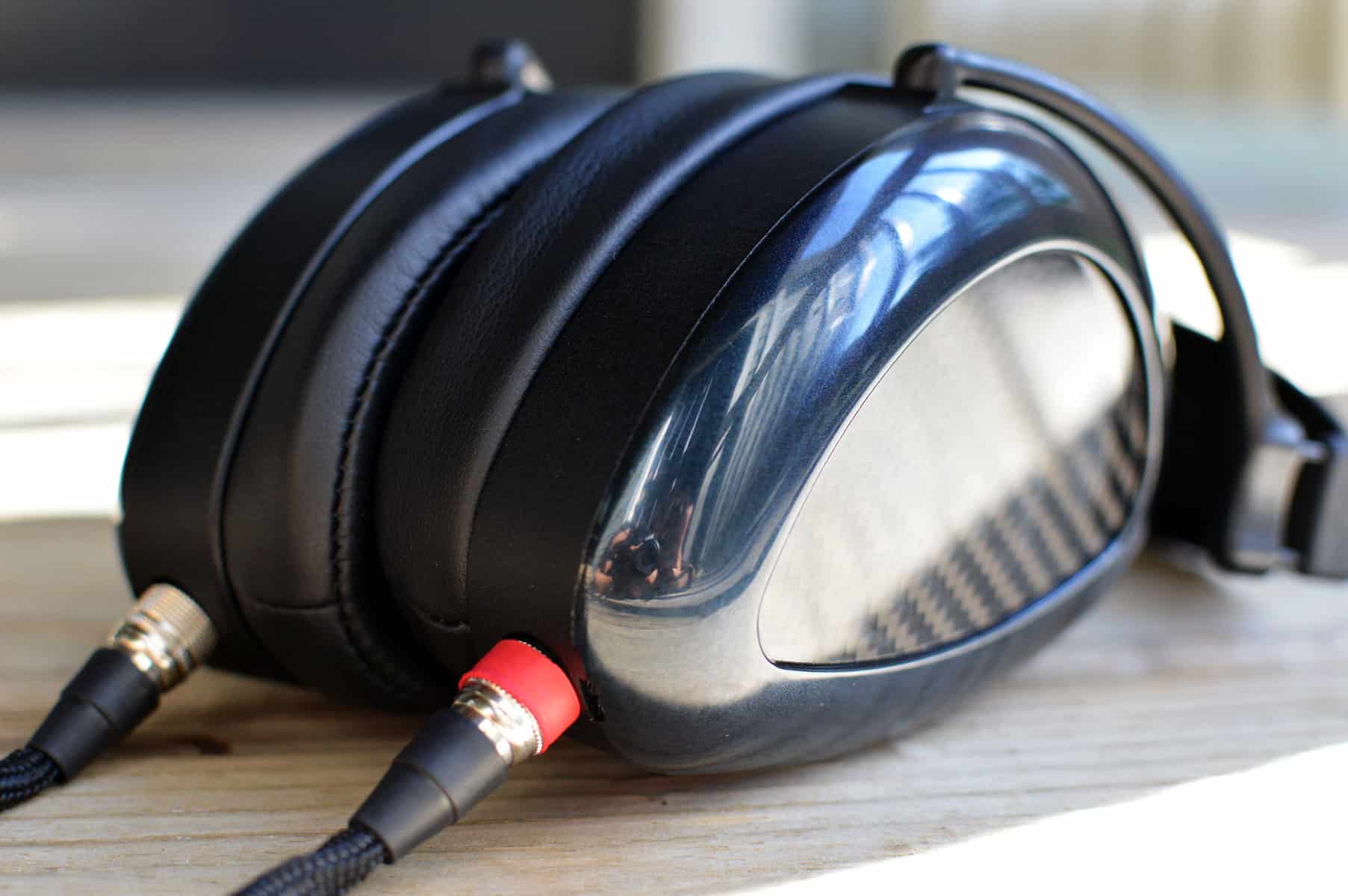 The Aeon Flow is about as close to perfection as you’ll find. 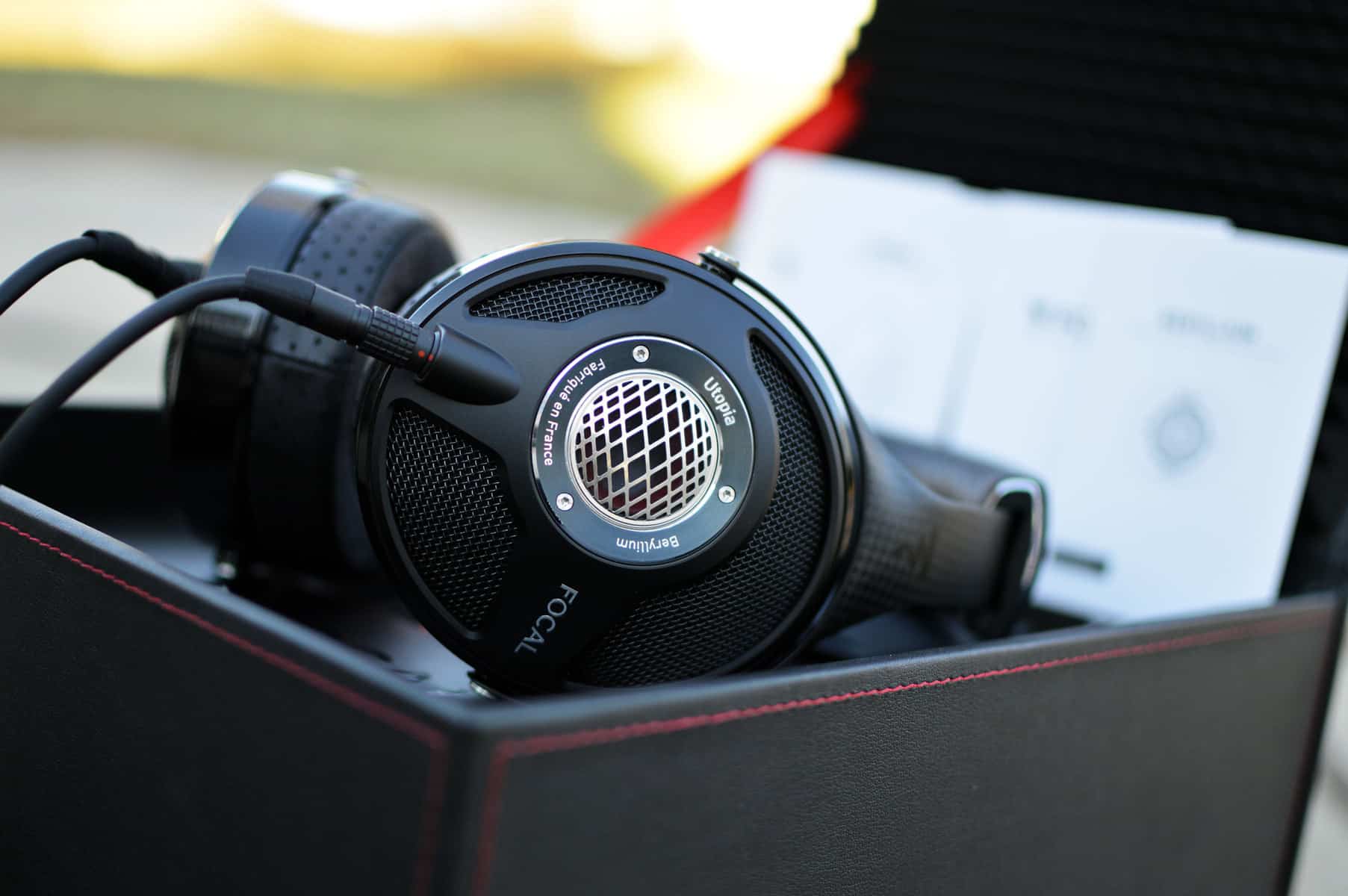 Well, my friend, I hope you’ve enjoyed this comprehensive guide to the best headphones for Hip-Hop. Please let me know if you would like me to add/demo anything, and I will definitely do so if I can! Also, I will be updating this page frequently as I try out new headphones, add to, and take away from this list. Think of it as a constantly changing guide that will ebb and flow with the times!!

That said, this should get you started in the right direction. If I had to choose one on this list for you? The Aeon Flow Closed. Hands Down. It’s just absolutely breathtaking in every regard. Don’t believe me?

Well, that’s about it for today my friend! I hope you’ve enjoyed this article on the best headphones for Hip-Hop.

Questions? Comments? Requests? Did I miss the mark on something? Do you have a headphone to add? Please let me know down below or Contact me!!

Which of these headphones are you most likely to purchase? I would love to hear from you! Until next time…

The Best Headphones for Bass