Hey there friend and Welcome aboard!!

Before we get into the Status Audio CB-1 over-ear headphones review, grab a snack, sit back and relax because…

This is part of my “Budget Kings” Series, which takes a look at some of the best options for under $100. Check out:

Why did I place this fifth?

The CB-1 has a fantastic Soundstage, great instrument separation, and excellent comfort. What is Soundstage? Not much holds it back from the top spot, but it can sound a little too feathery/light sounding at times. The cable is also a bit of a pain to get in and out, but that’s more of a very minor nitpick.

They get fifth for these reasons but still remain an excellent buy at their price because what they do well outshines what they don’t in my opinion. The build is also pretty good, as they aren’t quite as flimsy as an HD558.

Overall, the inclusion of two detachable cables (a coiled and straight), some metal, a great Soundstage, fantastic instrument separation/detail, great bass response, and an extremely sturdy 3.5mm termination make this an easy choice, along with the sound taken as a whole.

The Status Audio CB-1 is a closed-back, circumaural headphone with a build and style that looks like a cross between an Audio Technica ATH M40x, an M50/50x, and a Sony MDR V6/7506. Closed back vs. Open back headphones. Both the fold and mechanism that holds the ear cup look identical to both the 40x and aforementioned Sony models. Also, strangely enough, there’s not one hint of branding on the headphones, which I thought was weird.

What I like better about the CB-1 is that the ear-cups feel much nicer, as they are made of protein leather rather than the faux leather of the Sony’s and 40x’s, which both tend to crack, peel, flake, and harden over time. The cups are also much deeper and seem to afford a tad more room for your ears. The outside of the cups is encased in a genuine metal as well, which is welcome at this price. The trade-off is that the headphones are about twice the size of your melon upon mirror inspection, which makes you look like a complete doofus outside of the studio. 😛

That said, out of the 3, the 40x feels the most solid in your hand, followed by the V6 and then the CB 1. The CB-1 doesn’t feel quite as cheap as something like an AKG K240 Studio, but not quite as heavy/durable as a 40x. It kind of inhabits that middle ground and feels about as good as the price would indicate.

What I also found really interesting is the 3.5mm jack. It’s nearly identical to the jack used on the original M50. Perhaps the greatest compliment they could make, as that jack was the best one I’ve personally ever come across, and to this day still holds up over 5 years later. I’m fully convinced that all headphones should employ it.

What I don’t like about the CB-1 is although it has a detachable cable, it’s extremely hard and cumbersome to get out, at least at first. As you’ll see in my video review/unboxing, I was having a tough time on camera, to the point of me thinking that it wasn’t even meant to come out, even though they do come with a straight and coiled version.

I was able to finally pull it out, but it took me pulling from a lower point of leverage, which also left me uncomfortable. You should always be able to grab at the top (where you’re supposed to grab) and not have to resort to pulling from the thinner part of the wire if that makes sense. Your fingers are libel to hurt a bit after getting this beast out of its hole.

What I do like about the coiled version of the CB-1’s cable is that the coil is more manageable than both the V6 and the 40x. The V6’s coil goes on for days and will become tangled quite easily over a span of about 2 years. The M40x’s coil is a bit shorter, and the CB-1’s is the shortest.

Ultimately, the build of the CB-1 overall is pretty good but still ranks last among these 3 in a big picture analysis.

This is where the CB-1 wins out by a small margin. The ear cups are extremely plush being that they are a soft and supple protein leather, with plenty of room to breathe. The cups are thick enough for the driver to stay away from your ears, and because the headphones are lighter, they make for a more comfortable fit over time. What is a headphone driver? Both the 40x’s and V6’s clamp force is tighter than the CB-1, with the 40x taking the top spot as far as pressure goes.

As far as sound is concerned, overall I do like it, but there are a few small nitpicks. One is the mid-bass. There’s something a bit strange going on, and it comes across as a little bloated and forced. This also affects parts of the mid-range, as it seems a bit sucked out in spots, or pushed back (recessed). The third issue is that because of this weird mid-range, the treble can be metallic sounding at times, resulting in an essy character that’s a bit problematic. There are times when the CB-1’s sound flat out awful, with a treble that’s not as piercing as it is just simply “Crumpled”, and yes, sibilant as well. What does Sibilant mean?

These aren’t bass light, but they’re also not a bass heads headphone. They just sound kind of right, even despite the fact that the bass does roll off a bit.

Overall, I do prefer the sound of the CB-1 over the M40x and even my beloved V6. It’s just more of a relaxed listen and you’re not getting any musical fatigue like you would with the others.

In comparison to an M40x, the CB-1 seems more open, more detailed, and more relaxed sounding while still being a fun listen. The Soundstage and scope of the sound seemed larger as well. These do indeed have a bit of a wider image than your typical closed-back headphone, and it’s one of the best qualities about them. It makes the CB-1 a relatively easy purchase as a headphone that you can put on and immediately enjoy.

The 40x by contrast is more of bass heads can, but the mid-bass can be problematic at times, in addition to the essy and sometimes metallic treble. The CB-1 doesn’t have these issues and comes across as smoother and more fluid sounding.

The V6 is a cleaner and more sterile sound, but definitely brighter and more in your face. The V6 is a reference go to and has been for decades, but I think the CB-1 outshines here with regard to detail and spacing specifically. I was hearing a lot more going on in the mix with the CB-1 than I have with most other headphones, including my beloved V6.

The bass on both is crisp and textured if a bit rolled off in the lower regions. Can’t really say which I prefer more. I think they both sound fairly similar actually, but the V6’s maybe slightly cleaner and more refined. It’s a tough call.

Video Shootout/Comparison to the 40x

Not needed, but I use mine with an Oppo HA-2. How to choose a Headphone Amp!

I would say they will do well with most genres, and I listened to them with:

The Status Audio CB-1 is a headphone that gets a whole heck of a lot right. Price, comfort, Soundstage, and overall sound are all very good. The inclusion of two detachable cables plus a beefy 1/4″ adapter is much appreciated as well. The treble does tend to sizzle a bit too much, and the mid-range can be problematic at times. Overall though, this is an easy recommendation at this price point.

SEE WHAT OTHERS ARE SAYING ON AMAZON!

Well, that’s about it for today my friend! I hope you’ve enjoyed this Status Audio CB-1 over-ear headphones review.

Questions? Comments? Requests? Did I miss the mark on something? Please leave them down below or Contact me!!

What do you think about these bad boys? I would love to hear from you. Until next time… 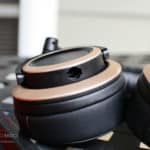