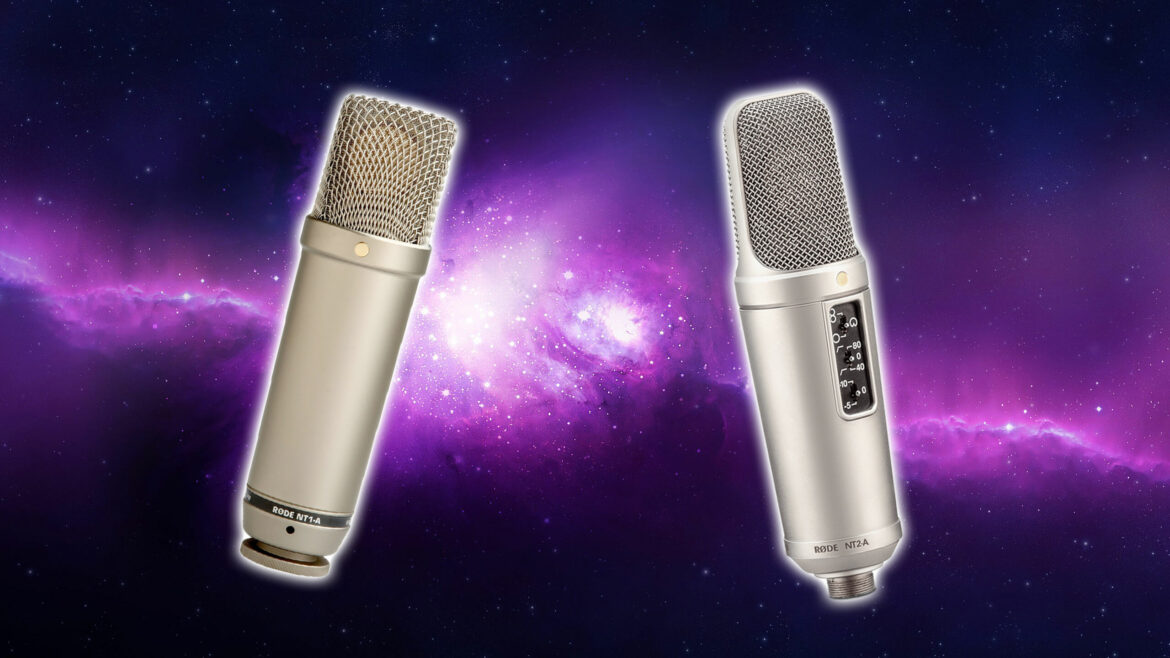 Let’s take a quick look at a chart to start!

Before we get the Rode NT1A vs. NT2A comparison, grab a snack, sit back and relax because…

You’ve come to the right place!!! This mic seems to get either glowing reviews, or people really complain about it.

Some say it’s the warmest, most even-sounding mic you can buy in this price range.

Others claim that the high end is harsh, sibilant, and much too bright.

It can start to sound tinny and thin with big voices, coming out rather sterile.

I read a lot of folks regarding it so highly, that they would gladly put it up against mics way out of its price range, specifically a Neumann U87.

One thing to keep in mind:

You probably shouldn’t record with this mic using your standard computer speakers. I have read that having good studio monitors is a must. What are studio monitors?

If you don’t, your mix will sound amazing to you but translate poorly on other electronic devices such as your car speakers.

The build quality on the NT1A is nothing short of amazing, and it goes really well with a Scarlett 2i2.

It may pick up things that you don’t want, so be aware of your studio setup.

One thing that really stood out to me was the 10-year warranty that can be bought through Rode’s website.

A ton of people commented on its ability to record acoustic guitars with the greatest of ease.

If you’re looking for a mic that can do just that, this may be for you!

All that said, I’ve seen it endorsed for:

As alluded to above, this mic needs:

Find out more about your audio interface!

A durable mic with a rock-solid 10-year warranty (purchased through Rode’s website). It’s extremely sensitive and can pick up a fly farting in the next country.

Lol, that was straight from an amazon review, can’t take credit although it made me laugh.

It compares favorably with mics way out of its price range but may sound harsh and sibilant to many. The high end is a bit tinny and too bright for some people’s tastes.

If I had to choose one thing to say about this mic, it’s that it does really well for instruments, but not as good for vocals due to it being extremely bright.

By many accounts, this mic is actually better than the NT1A but does cost more.

It has 3 different polar patterns for added flexibility, and a lot of people said it was the most versatile mic they’ve ever used.

Here are the 3 patterns:

Check out this great post, What You Need to Know About Microphone Polar Patterns.

The NT2A is better for vocals than acoustics but does well with both. Like all condenser microphones, it’s very sensitive and picks up a lot.

It has a natural sound, with a nice added warmth, but doesn’t really color the sound in any way.

It’s very true in recreating what it hears, with an even sound representation.

Check out this in-depth video covering everything about the NT2A!

The NT2A is great for all of the following:

Being that this is a studio bundle, the only thing I would recommend is to purchase a good and durable mic stand. Your typical On-stage stands won’t cut it here.

You may want to consider investing in the ATLAS SOUND MS20E Heavy-Duty Microphone Stand.

For heavier mics such as this one, it’s a great option.

You will also need 48v phantom power via a mixer or audio interface.

Again, the Scarlett 2i2 is what I would recommend.

A really versatile mic that is at its best with vocals. It also does well with a wide variety of instruments and has a lot of features not found in other mics.

The fact that you can control all of these features on the front of the mic is a huge added benefit.

If you need a mic strictly for instruments, and would rather save some money, the NT1A is an excellent solution.

If you want a mic that is extremely versatile, with a ton of added features, go with the NT2A.

SEE THE NT2A FOR YOURSELF ON AMAZON

Well that’s about it for today my friend! I hope you’ve enjoyed this article on the Rode NT1A vs. NT2A.

Which of these mics is more suited to your needs? I would love to hear from you.

Thanks George!
If you ever need anything music production related, please contact me!
God bless,
-Stu

Great review. Thanks! I’ve been using the NT one for a while, and really like it for the piano. I like that your review wasn’t biased, and showed both sides. Sometimes, recording comes back to personal taste, and what you said about it picking up the high-end this could be a plus for some, and a minus for others Cheers

Thank you so much Mark! Let me know if you ever need help with anything!

Great post! What’s the best for double bass in classical music ?
Thanks

For budget, maybe the Studio Projects B1.

There’s so many options and people have luck with an array of mics. Let me know what you’re thinking about this and what your budget is.

I want a microphone for vocal recording plz suggest which one is Best???

Hey Nadeem what is your budget?

Thanks so much! Let me know if you ever need a hand with anything!

No problem man glad to help. Don’t hesitate to contact me if you need any advice.
-Stu

Thank you so much for this, but I’m still confused as to which to choose.

I am a beginner in sound production, and starting up a home studio specifically for recording vocals and some guitar.

I would like to get the best mic that suits a male, soft vocals, within 350 dollars range.

What do you think?

What kind of interface/preamp are you using? Would you prefer a dynamic mic or a condenser? Do you have any sort of room treatment employed? Let me know..

Two options off the top of my head are the AKG C214 and Shure SM7B. Check out my article on the SM7B.

Hey, Thanks for reverting back.

I am using a Focusrite Scarlett 2i4 connected to a Macbook Air. I would prefer a condenser as I have a very soft voice and I think a condenser would suit me well. Do correct me if I am wrong. I am leaning towards the Rode NT2a for now. Please do help me with this. Am I making a right choice? And as for the room it’s not treated much. I have some acoustic foam fixed perpendicularly in the corner of the room where I want to record my vocals.

I understand you have a soft voice. Would you like more presence or shimmer to make it sound more alive? My recommendation of the SM7B still stands, with the Electrovoice RE20 and Heil PR40 coming in second and third respectively.

If I were forced to choose between the 3 you mentioned in your other comment, the C214 is the best out of those. Honestly you’ll be happy with any of these. It’s more technique and EQ than anything else.

Let me know what you decide.

Thank you for the information. I am looking for a microphone that can handle big vocals and a wide range. I was originally going to just go with the Nt1. But after reading this review, I’ve decided that the NT2 is the best option for me since the majority of what I will be using it for is vocals. I do have one question though. In the Nt1 description it lists acoustic guitar as it’s strong point, but is not listed in the Nt2 “pros”. Is the Nt2 not as well equipped for softer sounds? Thanks again.

My pleasure 🙂 Nah the NT2A will also be good for various types of instrumentation as well. Let me know what you decide!!

I also apologize about the comparison table. It wasn’t showing when you made the comment but it’s now back up! I was having some technical difficulties with the plug in but it’s all up to speed now.

Would one of these be better for recording upright bass (jazz)?

Hey man! The NT2A for sure as stated in the article. NT1A is more for acoustic guitars.

I just got a studio and I bought NTA 1 , after reading this article I feel like getting NTA 2 but I don’t have the money can I still continue using the Nt1

Hey man! Actually, I would continue using the NT1 as it’s one of the flattest and best-vocied microphones on the market! I plan on getting an NT1 for my own studio if that’s any indication. That or an MXL 990 which is basically the budget version haha.

im planning on buying the nt1a with the motu m2 interface”what do you guys think of it? would love to hear anyone thoughts thankyou

Hey Robin! I myself am debating between the Motu M2 and Scarlett 2i2 3rd gen. I’ve previously owned a 1st gen 2i2. I have not heard the M2 but have heard great things.