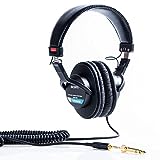 Today I’m the mailman (but not Karl Malone) and I’m going to be delivering some news about the Sony MDR V6 vs. MDR 7506! These are two well-regarded headphones in the world of audiophiles and have a few differences to speak of.

Before we get started though, grab a snack, sit back and relax because…

So without further ado, let’s get into it!

The Sony MDR V6 is a highly regarded, closed-back audiophile headphone that is at it’s best in a studio environment. It’s a mixing/reference can that proves to be very honest and neutral in its sound signature & presentation. It boasts a pristine clarity and has just the right amount of bass in my estimation. From graphs, you would think there’s none. It does roll off a bit, but the response is textured, nuanced, and extremely detailed. It kind of just rumbles really nicely. What the V6’s will give you is a tight, clear, controlled bass, but nothing overpowering.

Related: Closed back vs. Open back headphones

What’s startling to me about the MDR V6’s is that they have been around since the early ’80s, and maybe even the late 70’s. If you look closely enough, you will see these around everywhere. They will last you a LONG time and are about as reliable as it gets for studio monitoring. The sound spectrum is flawlessly represented here, although there may be a slight grain in the mid-range at first. You will start to hear things in recordings that you previously thought absent.

The treble is also a problem area for some. For me, it’s not. They are definitely on the brighter side, but I’ve been using them in my studio for a while now and I don’t hear any hiss, metallic hue, or essy character. I think they just tend to get “hot” in the treble sometimes, meaning there’s a bit too much energy.

These don’t need an amp, and by most accounts, they sound plenty loud enough with any of your portable devices. You can always opt for something like The Fiio E10K as it will enhance the sound a bit. That said, I wouldn’t get carried away with amplification here. This is a headphone with 63 Ohms Impedance and 106dB Sensitivity. That basically means that it’s not going to need a lot of power from an amp to reach peak loudness. Related: What is Sensitivity in Headphones?

Casual listeners looking for a crispy, uncolored sound. They do great with:

This is an all-around headphone that will work well with pretty much anything you decide to use it for. Out of over 10 headphones, this is one of the ones I use the most and one that I will not be selling even as I get rid of a lot of other headphones. It’s the quintessential studio headphone!

A very neutral, flat, and even sounding set of headphones. They will not amaze you in any way in regards to bass response, but the low end is tight and controlled. Overall they give you a pristine clarity and are some of the longest-lasting cans in existence. The main gripe is the ear-cup issue. Other less common complaints are:

These can be modded to fit a removable mini xlr cable as well as velour ear pads. Try at your own risk!

There’s so much to be said about the 7506’s that it’s hard to begin. These were the first pair of “higher-end” headphones that I purchased when I made my foray into the world of audiophiles. Being that I had never spent more than $20 on headphones, it was quite a monumental purchase, to say the least.

These were the first set that made me look at music in an entirely different way. The 2nd pair being the Audio Technica ATH M50!

These are studio reference cans, and really improved my mixes tenfold when I was first starting out. They have a ton of clarity in the treble range most notably, but be aware that they can get harsh and shrill at times, especially after a long listening session.

The best way I can describe them is that they are technical and analytical. They can bit a bit cold at times, which is perfect if you’re looking for an honest reference headphone. They do well as pure listening devices, but the main focus with these should be in the studio.

After putting them on for the first time, you will quickly see why they have been an industry standard for years. You may have seen them on TV and radio in various instances, they are used heavily by professionals and amateurs alike.

At 63 Ohm and 106dB Sensitivity, None! How to choose a headphone amp!

An amp can help out the sound quality a little, but like the V6 I wouldn’t go overboard here. Here are a couple of options that you may consider and ones that I’ve personally had a lot of experience with.

I wouldn’t worry about anything else outside of these two options for these two headphones specifically. They will be more than enough to make you smile and get some nice sound quality out of the tracks you listen to.

They work with all of the same genres and applications as the V6.

These are the industry standard for a reason. They are some of the most reliable and honest headphones you will find at this price range or otherwise. Build quality is above average overall, but the ear-cups may present problems. They are meant for studio and don’t really do well on the go.

Outside of those differences, these headphones are very similar in a lot of ways. The V6 is the original. The 7506 was created due to consumer demand for more bass. That’s really the gist of it in a nutshell.

CHECK IT OUT @ SWEETWATER!!

Well, that’s about it for today my friend! Hope you enjoyed my Sony MDR V6 vs. MDR 7506 comparison review. I also hope you have a better idea of the similarities and subtle differences between each.

Which of these do YOU like more? Let me know down below!!

If you have any other questions, don’t hesitate to drop a comment in the box, or Contact me! I very much look forward to speaking with you…