Aloha friend and Welcome aboard!!

Before we get into the Audioquest Dragonfly Red Review, grab a snack, sit back and relax because..

The Dragonfly: A Deeper Look

On the surface, the name Dragonfly given to a portable Amp/DAC as small as this seems fairly straightforward. It’s lightweight, extremely portable, and can literally go anywhere much like a real Dragonfly.

When I first wrote this article, I didn’t give it much of a second thought. But as I was creating the graphic for the article months later, I became interested in the backstory of the insect itself. It turns out that these somewhat erratic creatures are extremely fascinating upon further examination.

You may recognize the predator Dragonfly as almost an afterthought, even though it’s been around for about 300 million years! Whenever I see them during the summer they always have this tendency of darting around aimlessly (so it seems), and because they don’t pose a threat and never bother others, I just sort of ignore them. They’re really peaceful as well. One even landed on my lap while I was at the pool and I wasn’t scared at all. And no, it wasn’t the one pictured to the right. How could you even insinuate that I would harm a Dragonfly! Lol.

But really, imagine that, an insect that doesn’t bother you. Wow. What a concept. I wish Bumblebees and Wasps would take note. Lol.

What’s incredible about a Dragonfly is the fact that it can move at speeds of 45 mph, hover, fly backwards like a hummingbird, fly straight up, straight down, and side to side. Uh, I guess humans are pretty cool too. We can attempt to walk in a straight line after being pulled over by the cops. Lol. What’s even more impressive is that it can do all these things while only flapping it’s wings 30 times per minute. For perspective’s sake, a Mosquito must flap 600 times and a Housefly 1000 times!

The beautiful Dragonfly also showcases iridescent, opaque wings that reveal what’s called Structural Coloration: The ability to reflect many different colors as the angle or view of illumination changes.

Though we see them as flying insects, only a small portion of this time (a few days to a few weeks) is spent in the air. The majority of their 6-7 month lifespan occurs as a larvae (or nymph) in the freshwater regions.

It’s metamorphosis takes form when the larva comes out of the water to hang from the bank or some sort of stem, while enjoying the warm sunshine and eventually turning into an adult Dragonfly. Before it can take flight, it’s wings have to dry; in this state it’s referred to as the Latin word teneral, meaning tender, soft or delicate.

Many “tenerals” in this critical stage die out due to strong force winds, boats, other predators, and even other larvae! How sinister is that. A soon to be Dragonfly can be taken out by a larva in it’s infancy. Mind blown. Call it not so friendly fire.

Though the Dragonfly in flight is a formidable predator, it must constantly be on the lookout for other predators like birds, lizards, frogs, fish, and more. Because of these dangers, the Dragonfly is naturally well equipped with 360 degree vision, extremely agile flight, and a fast speed as discussed earlier. That’s God’s handy work!

Unfortunately, the mature Dragonfly’s life is short lived, only surviving for a maximum of 6-7 months in ideal conditions, and sometimes as little as just a few weeks!

If there were ever a creature to live in the moment, it’s the Dragonfly. Let that be a lesson to us as humans. We tend to live in the past or future a lot of the time, always worried about our “plans” and constantly looking ahead for better days. Even worse, some of us can’t stop reflecting on past mistakes and what we could have done better. The fact is that it’s hard to live in the here and now, but it is possible.

Life is but a fleeting moment, so let’s make the best of it by being grateful for what we do have, and loving ourselves right where we are.

With that, let’s get into the device itself!

I knew before even demoing this baby that it was going to sound good. What I didn’t realize is just how good it really is. As far as value and price to performance, I would almost rank it ahead of both the Oppo HA-2 and a Chord Mojo. Why?

Because it’s about the size of a Tic-Tac.

Okay maybe not that small, but you get the idea. 😛 You can literally take in anywhere! You can also pair it with your phone, but an adapter is needed. More on that later.

If the sound of your laptops internal Soundcard sucks (most do), and you don’t feel like investing in a desktop solution, but still want to experience what an Amp/DAC combo is all about, I would buy this almost instantly without hesitation. What is a Soundcard?

What makes it so valuable is the fact that it will improve the resolution and clarity of almost any song via it’s powerful Digital to Analog Converter. How the heck can something so small be so amazing? We’ll delve into that in a bit. First, learn more about how your PC processes sound: Bit Depth vs. Sample Rate.

A DAC’s primary function is to convert the 1’s and 0’s (digital data) from your computer, phone, mobile device, etc., into sound that you can understand (analog). If you’re screaming obscene rap lyrics into your mic, your computer understands it in a binary way, and doesn’t judge you. 😛

But if the DAC is crap, then the sound is no good. My laptop’s DAC (or Soundcard) isn’t bad per se, but it doesn’t provide a sound that’s loud enough.

A solution like the Dragonfly Red provides a quick fix by not only amplifying the sound to a listenable level, but making the quality of the conversion itself better in the process. A double whammy of goodness!

The cool thing about the Dragonfly is it’s ability to light up in different colors according to source file. This is done via a 1mm LED inside the device that illuminates the logo on the outside.

The other cool thing about the DragonFly is that as soon as you plug it in it’s volume is controlled by your laptop. No fuss no muss! Even on my crappy old Lenovo T510 (soon to be retired), I’m able to use the on-board volume buttons. Suddenly the laptop has lots more value 😛 It feels cool to adjust the volume on the laptop and not be using the poopy internal Soundcard while doing so.

Check out the video!

Here I did an in-depth A/B comparison of the Black & Red version, as well as a Shootout between the FiiO E10K, DragonFly Red, and HA-2! Don’t forget to like, comment and subscribe to my growing channel. Any support is much appreciated! 🙂

Let’s take a look at some photos..

So as promised, it is possible to use the Dragonfly Red with your phone, and you have a few options at your disposal:

If you’re on a MAC, the USB ports on the back may fare better as far as sound quality goes. The ports on the side are said to be not as good, and may result in a slight degradation in quality.

As for why such a small piece of equipment can sound so amazing? The secret lies in it’s 32 bit ESS 9016 chip, which provides a more realistic sound and an upgrade from the Dragonfly Black’s 32 bit ESS 9010 chip.

Also, it’s 2.1V output provides more power for higher end audiophile type headphones with a lower sensitivity. What is Sensitivity in Headphones? For instance, the Dragonfly powers my Sennheiser HD 600’s with relative ease, something I was completely taken aback by. Learn more: Sennheiser HD600 Review.

If you were interested in the differences between the Black and Red models (and other iterations of the Dragonfly): Audioquest Dragonfly Black vs. Red!

The Dragonfly Red provides a portable, convenient, and highly effective solution for your desire to obtain great sound. It’s price to performance ratio is astounding, and it’s built extremely well despite being so small. This is one piece of gear that I would recommend
100% of the time in any circumstance.

SEE THE DRAGONFLY ON AMAZON!!

Well that’s about it for today folks! I hope you’ve enjoyed this Audioquest DragonFly Review.

What do you think about this piece? Is it worth the investment? Let me know!!

Questions? Comments? Requests? Did I miss the mark on something? Let me know in the comments below or Contact me!! I would love to hear from you..

Until then, all the best and God bless.. 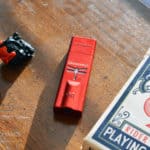